Every year my family gets together for a family vacation. Usually we go in August or September, but with three babies scheduled to be born between August and November, an earlier trip was a necessity. This year, we went to South Padre Island. James and I had never been to South Padre before and we had a lot of fun. Check out Dzubi Dzubi Dzu and SEW Very Blessed for Julia’s and Sarah’s commentary on our trip.

Jason, Julia, James and I joined Sarah, Brian, and Cameron on their plane to Harlingen when it stopped in Austin. Cameron ended up spending most of the flight sitting with James and I. Cameron really likes his Uncle James. He also enjoyed shutting and opening the airplane window shade.

From Harlingen, it was about an hour drive in the two rental SUVs to South Padre Island. After getting settled in at the Redfish Inn, we went to eat dinner at the Shrimp Haus Restaurant, next to Schlitterbahn Beach Waterpark. My Dad and I had read a really good review in the June 2009 issue of Texas Highways about this restaurant, but we were all gravely disappointed. Afterward, we walked the boardwalk to the beach where Cameron got his first taste of the Gulf of Mexico and got soaked in the process.

View of the Gulf

After eating breakfast, we drove to Brownsville, about 45 minutes away, to go to the Gladys Porter Zoo. There were a bunch of school children at the zoo, but it wasn’t too crowded besides them. The Gladys Porter Zoo is one of the first zoos to utilize cage-free exhibits. I think my favorite exhibit was the Western Lowland Gorillas. 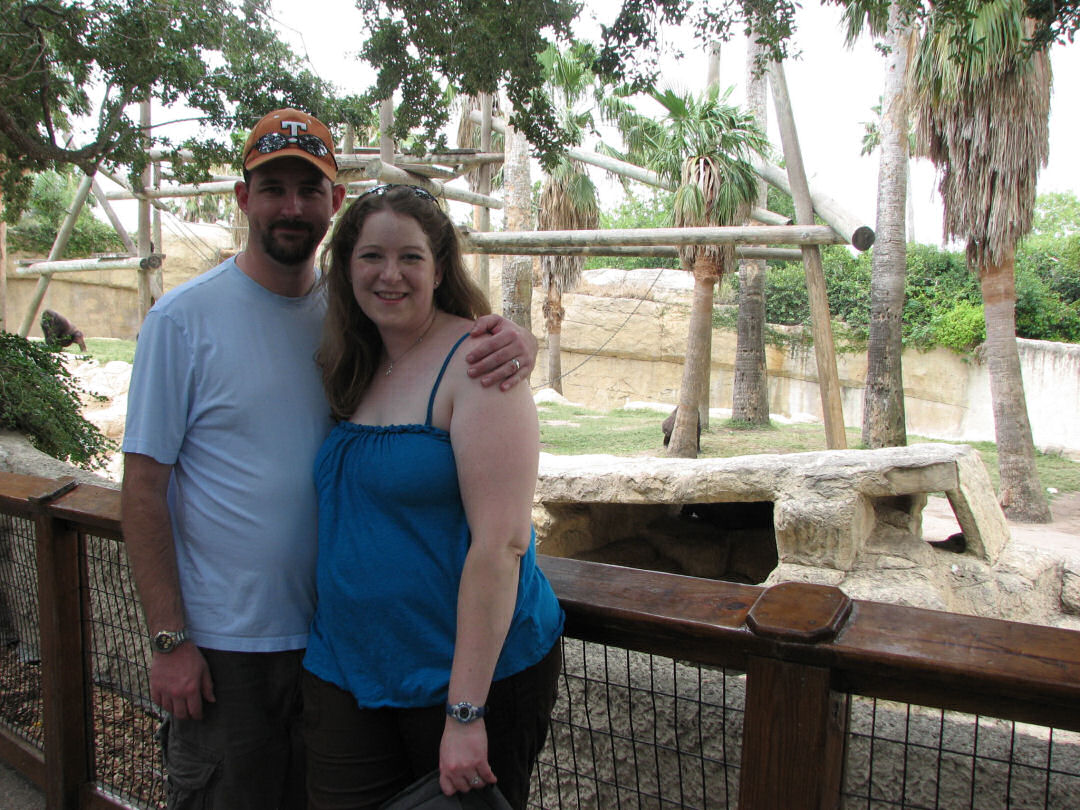 James and Jennifer in Front of the Gorilla Exhibit

On the way back to the island, we stopped in Port Isabel. We climbed the 75 steps of the Port Isabel Lighthouse, which was originally built in 1852. The view from the top was outstanding. 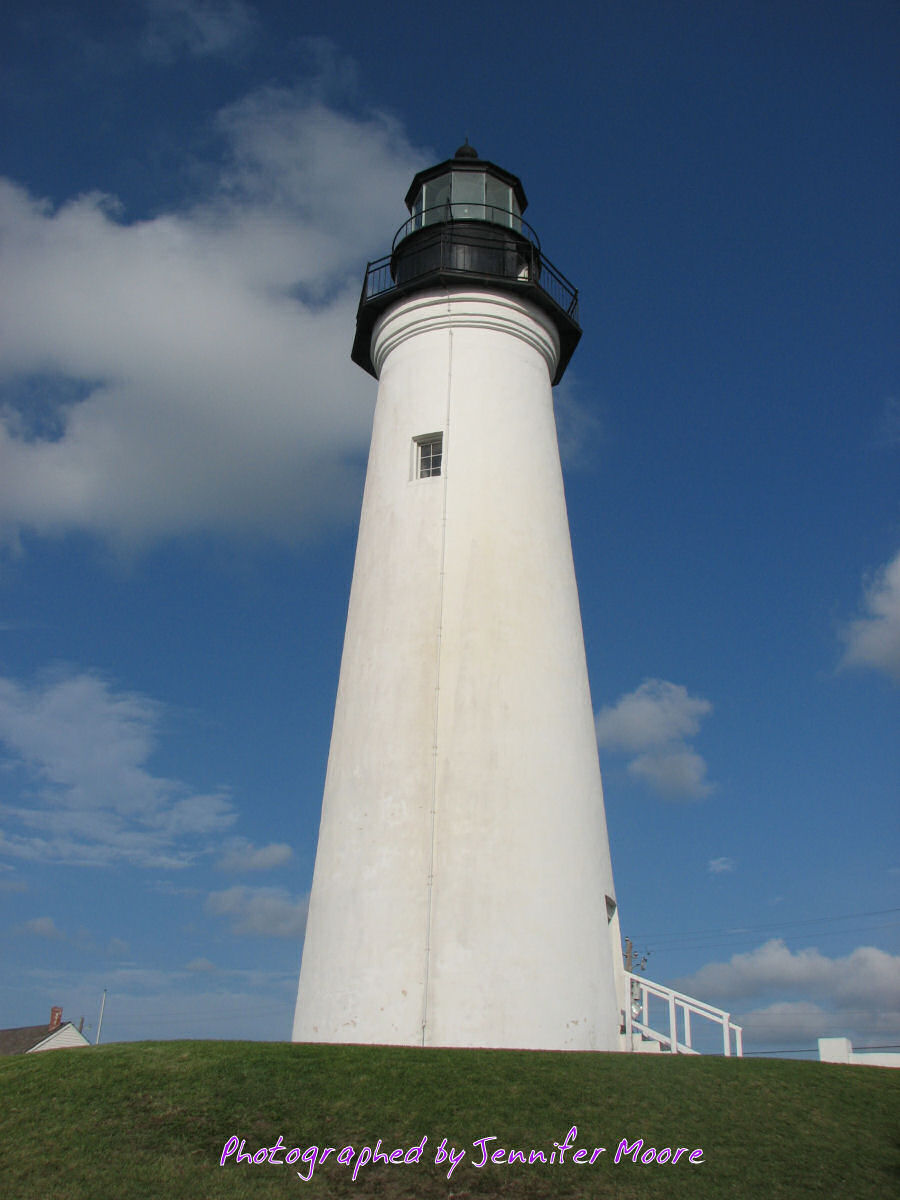 After relaxing at the inn for a little while (so Cameron could take a nap), we returned to Port Isabel and ate dinner at Marcella’s Italian Restaurant, which was much better than the Shrimp Haus the night before. Afterwards, we watched “Will Some,” the fire-eating pirate perform some tricks before boarding the Black Dragon for some high seas adventure. We learned the pirate code. Jason, Julia and Brian practiced their fighting skills with water-shooting pistols. We saw dolphins, including a baby and his mama, in Dolphin Cove. The pirates gave us a pirate look even if we didn’t necessarily want one, because it was all about equality. For James, they just added curlicues to his mustache. Brian, Jason and Julia played hot potato with a rubber crab and buckets. Jason and Brian did the pirate limbo. The evening ended with a good view of the fireworks over the Laguna Madre bay. 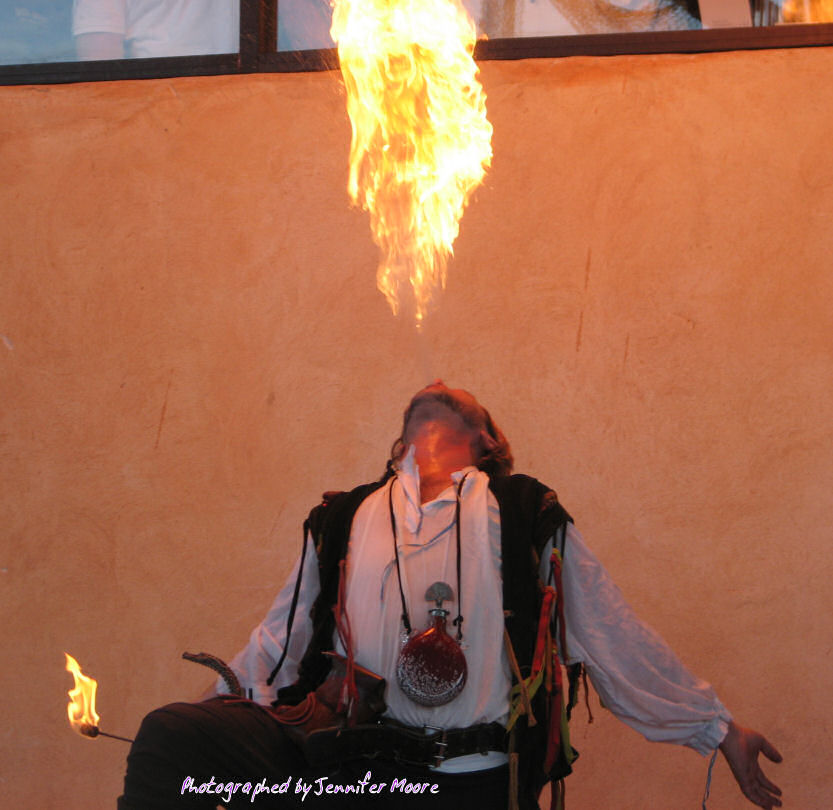 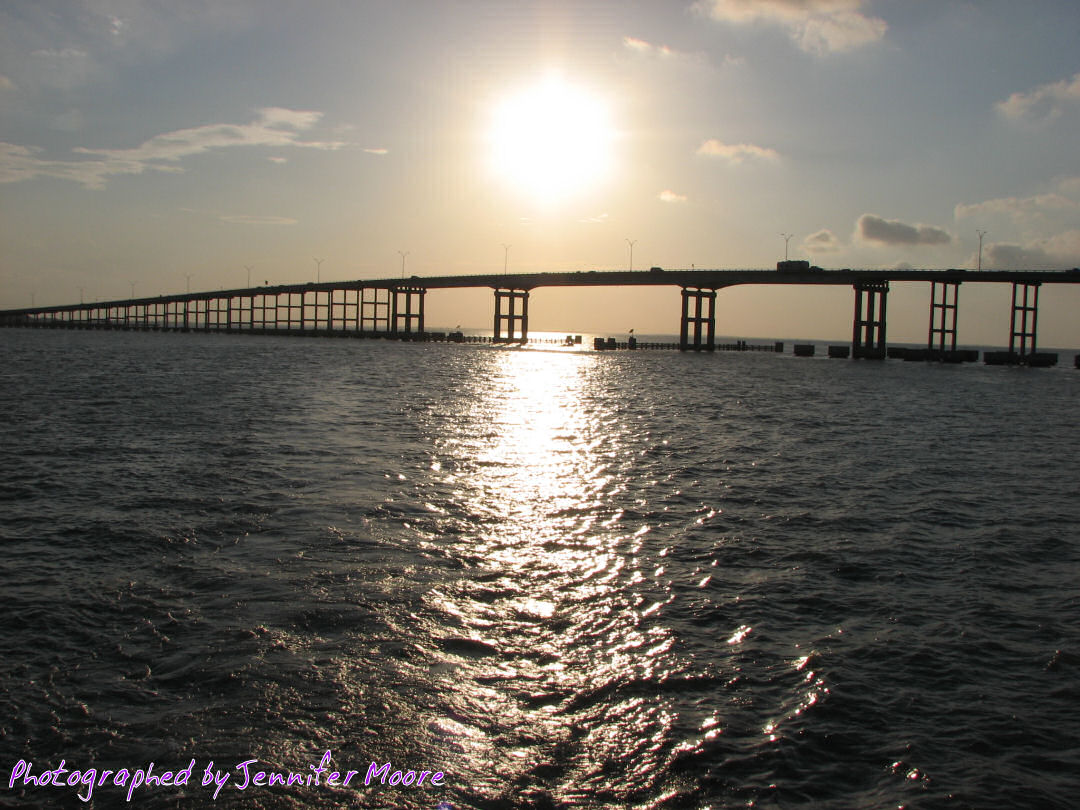 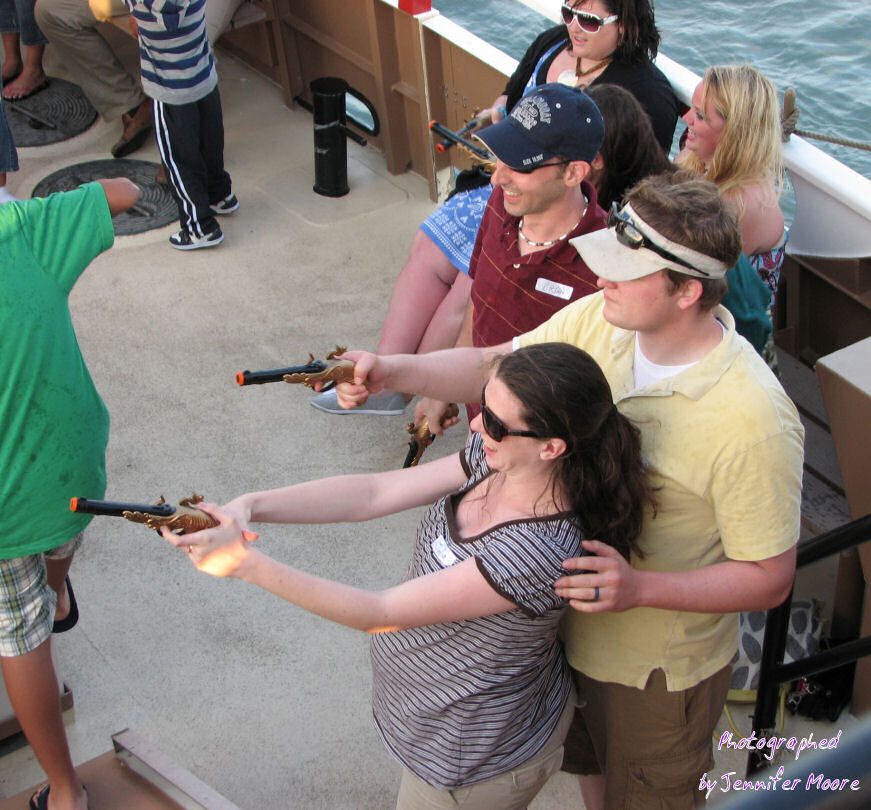 Julia, Jason, and Brian Participating in a Water Gun Fight 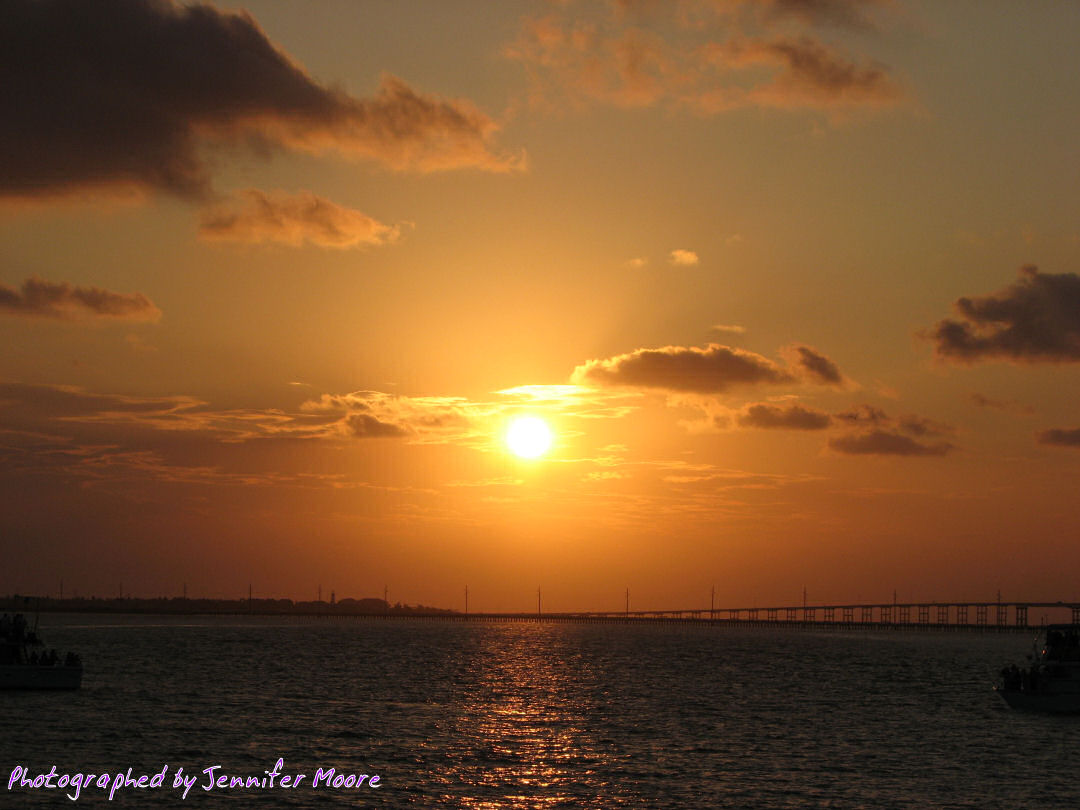 Sunset over the Queen Isabella Causeway

After breakfast at the inn, we went to the gulf side of the island to hang out at the beach. We jumped in the surf. I ended up losing my sunglasses when an especially strong wave knocked me over. We built sand castles. Jason asked two sun-bathers to judge for us and they picked Sarah and Brian’s sand creation. 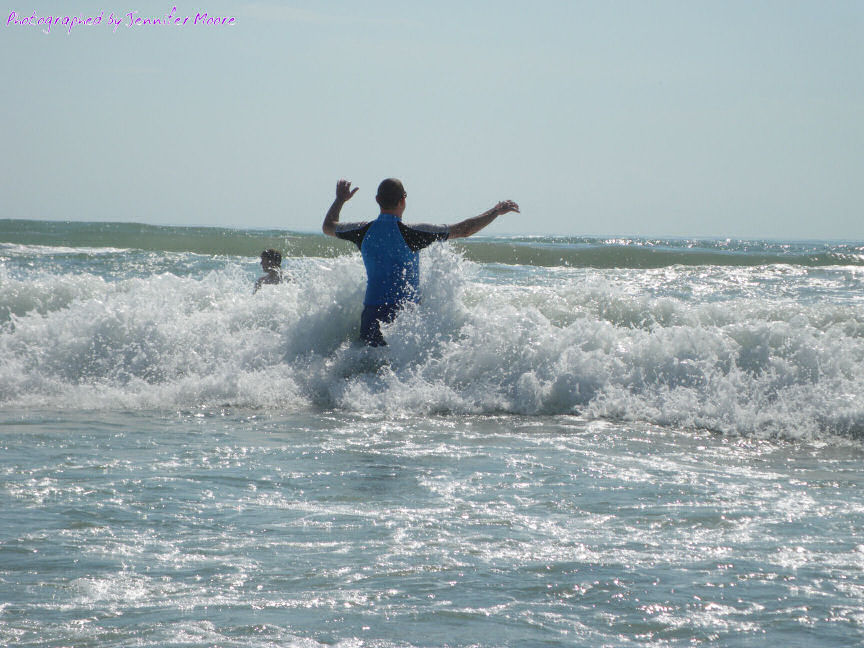 Jason and James in the Surf

Cameron and Jason Playing in the Sand

Group Photo on the Beach

We cleaned up and had lunch at Tom and Jerry’s Burgers and Beer, a decent restaurant on the main drag. This was followed by our annual stockholder’s meeting on the covered porch of the inn. We had dinner at Louie’s Backyard, which had good atmosphere, okay food and excellent dessert. Dinner was followed by the adults playing a game of Cranium that Jason and Julia won.

Group Photo on the Veranda of the Redfish Inn

Brian, Sarah, Cameron, James and I went to the beach after breakfast. Cameron was no longer distracted by playing in the sand. He fearlessly ran into the water. He wanted more wave action.

While we were at the beach, the rest of the gang went in search of paddleboats to rent on the bay side of the island. When they didn’t find any, they rented a 4-person covered bicycle that the four of them pedaled and Jason controlled directionally. Based on the pictures they took, it looked like fun.

Lunch was at the Padre Island Brewing Company. Brian, Dad, and Jason sampled the five beers they brew on site. Lunch was followed by a nice nap. I think all that fun in the sun wore me out. Dinner was at Scampi’s Restaurant, which happened to be across the street from the inn. It was by far the best meal we ate all weekend. We again played Cranium after dinner and this time James and I won.

After a relaxing breakfast, we packed up and drove back to Harlingen to catch our flights home. I was sad to see the trip end, but we had a lot of fun.