This post is very picture heavy (30 pictures total) and maybe I should have split it in two, but oh well.

We drove to Midland the Wednesday before Christmas. This was the first long car ride with Jessica forward facing. We took along some baby DVDs and she spent most of her time in the car watching them, outside of the very short nap she took. Her favorite is the Baby Einstein Baby MacDonald video about the farm. By the time we went to Keller for New Year’s weekend, she was pointing up at the DVD player if she was awake and there wasn’t a video in it. I’m not sure that is a good thing, but we don’t really watch any TV when we’re at home, so I guess in the car it is okay.

I tried to have holiday inspired clothing for each of the four full days we were in Midland. Here she is on the day before Christmas Eve. 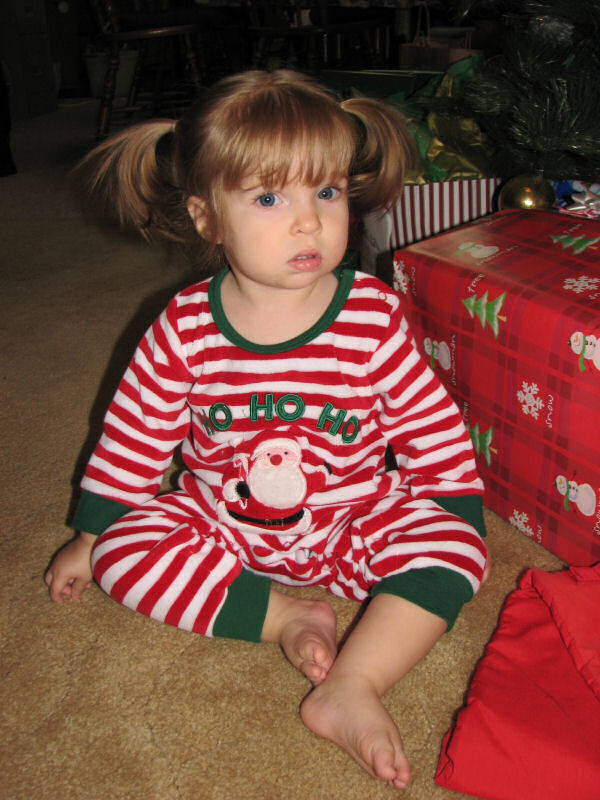 Chilling on the Couch

Jessica enjoyed playing with her cousin Dawson while in Midland. The first two days we were there, he was all about “baby Jessica.” Here he is chasing her in the kitchen. 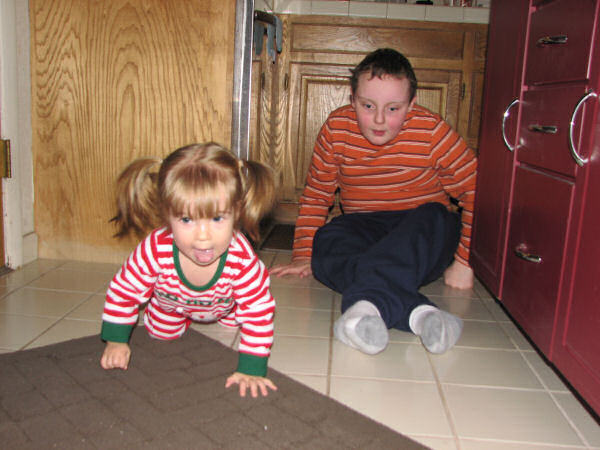 Christmas Eve morning, we went over to my parents’ house before going to Rosa’s to lunch with them. We pretty much always make a stop at Rosa’s when we’re in town.

Jessica and her Nanny 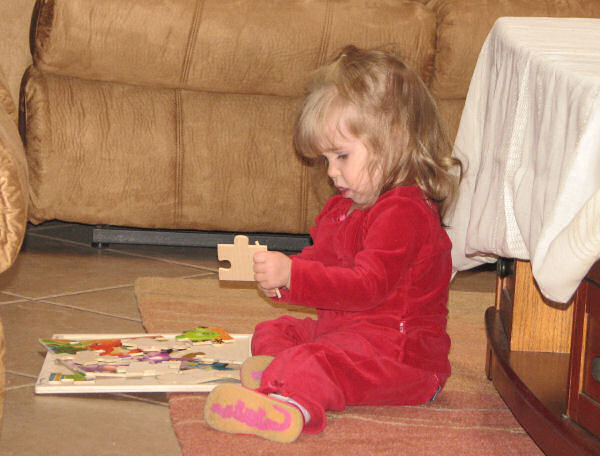 Late afternoon, we attended the candlelit service at Crestview Baptish Church with James’ parents and our nephew Dawson. After the service, a photo op presented itself in the church lobby. Although Crestview was pretty casual in terms of Christmas attire, I loved getting all dressed up. Having a child makes me get sentimental, and I always remembered a new dress for Christmas. Jessica’s dress is Christmasy with snowmen and Christmas trees, but with the colors not outwardly Christmasy. I look forward to many more Christmases of getting dressed up for church. 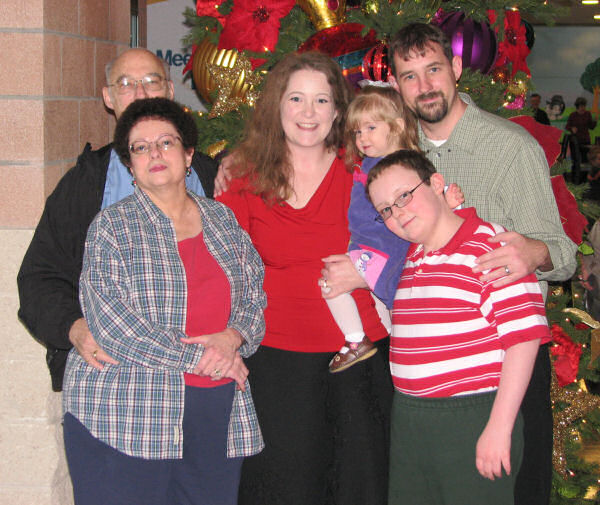 After church, we all ate dinner (Tami, Randy, Granny & Pawpaw too). Then we opened gifts. Usually James’ family just digs into presents and no one really gets to see anyone open anything, but this year we watched the kiddos open a few things before everyone else dug in.

Dawson showed his Christmas spirit by wearing a Santa hat the entire evening.

It was so much fun watching Jessica open her gifts. I think she really gets present opening now. 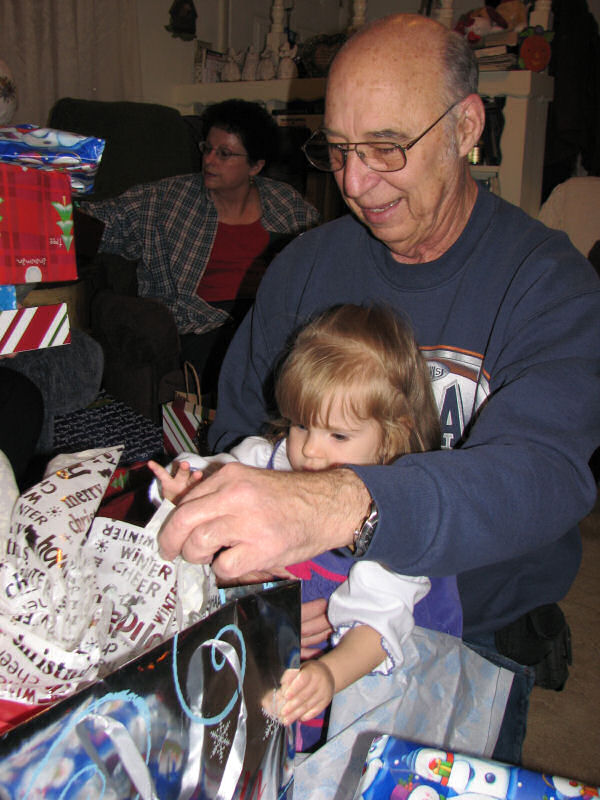 Jessica Getting Some Help From Grandpa

Jessica Opening a Gift From Nana and Grandpa

Jessica Opening a Gift From Mama and Daddy

James and I didn’t really get her much this year since the big Santa gift we had planned fell through due to being out of stock. However, the books we did get her, she really enjoyed.

Jessica Checking Out a New Book 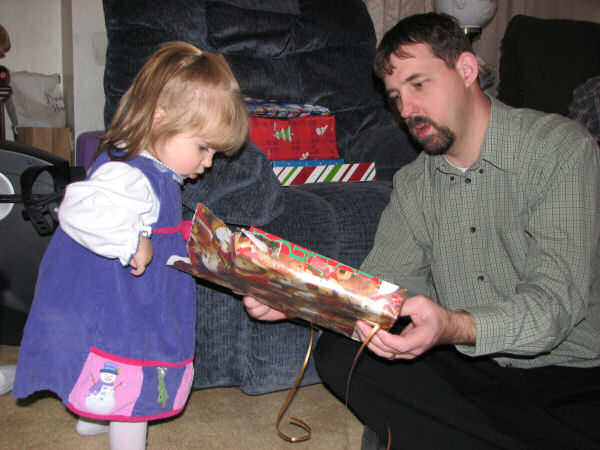 One of the gifts James’ parents got Jessica was this Bethlehem book that sings. Jessica really liked how it lit up too. 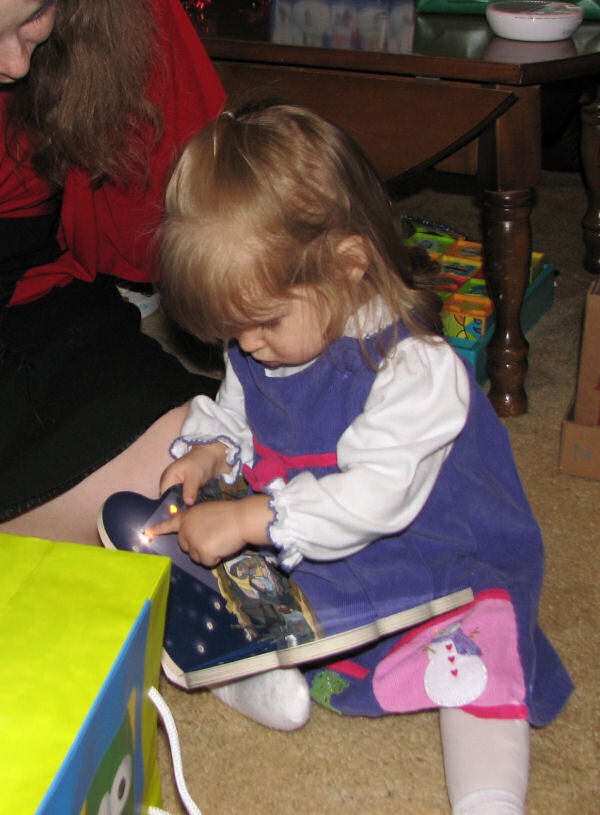 Jessica Enjoying the Lights of O Little Town of Bethlehem

For James’ Mom and my Dad this year, I made a Shutterfly book that looked back on Jessica’s first year. I made a third one for Jessica too. I had wanted to share it on my blog, but you have to set up a Shutterfly share site. Instead if you want to see it, come visit (I love to have company) and look at Jessica’s.

Olivia Opening Her Gift From Us

Before Tami, Randy, and Dawson left to go home, I took some family photos. I had wanted some with Dawson too, but he’s at an age where all he wants to do is make faces at the camera (I hope Jessica never reaches that phase).

James and His Sister Tami

James With His Mom and Sister

Here’s Jessica in her Christmas pajamas Christmas morning. Aren’t those little reindeer on the feet cute? 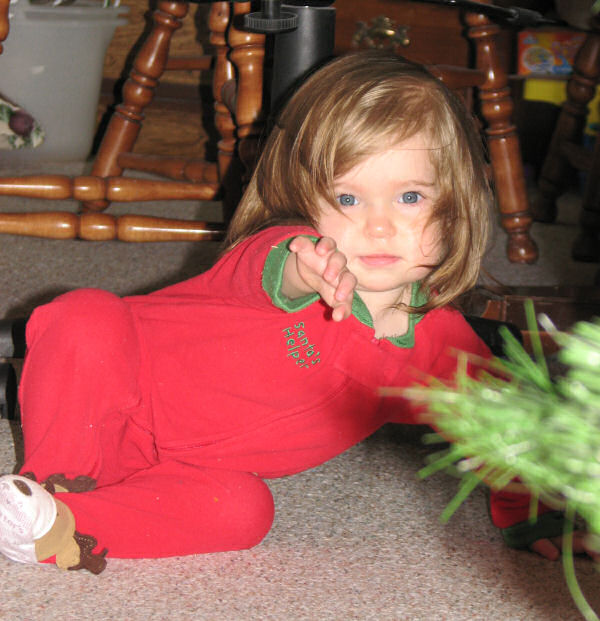 Jessica Sitting on the Floor

One of her favorite activities at James’ parent’s house was climbing the high chair. She would go up and down repeatedly. It about gave James’ Mom a heart attack, but she only fell once and it barely even phased her.

After breakfast, Jessica opened her gift from Santa. She really enjoyed the stuffed dog Santa brought her. “Santa” only spent $5 on that dog since he was busy buying gifts for other kiddos and got the dog as a deal. 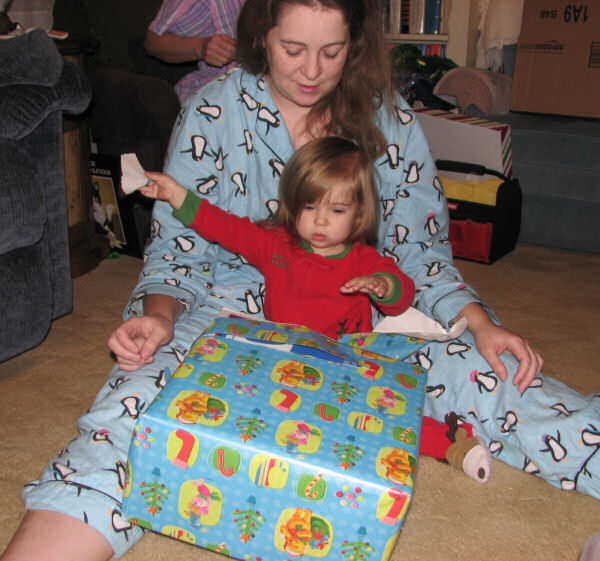 We then went over to my parents’ house to visit and eat lunch. Jessica opened her stocking there and she discovered how tasty marshmallows were.

Santa visited Jessica at my parents’ house and brought her a Curious George book and monkey. She seemed to dig the monkey and held him while I took some photos before we left. 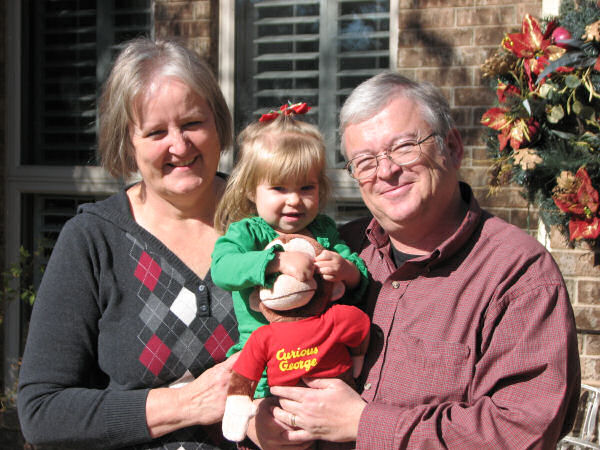 Jessica with Her Nanny and Papa

That afternoon we opened stockings with James’ family. Jessica helped her Daddy open his stocking. She enjoyed all the sparkly sequins on the stocking James’ grandmother made for him a long time ago. 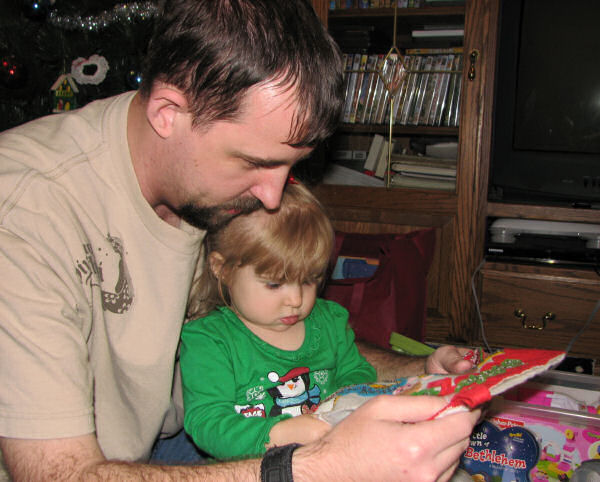 Helping Daddy With His Stocking 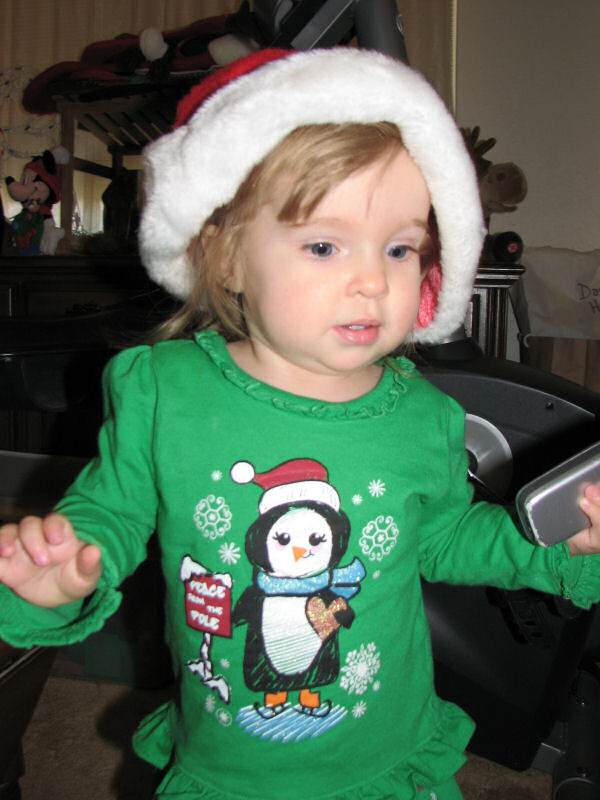 Dawson received a number of Wii and Nintendo DS video games for Christmas including a Wii Lego game from us. He spent most of the time he was at James’ parents’ house that day playing on his DS (a kid loves new play things). Jessica was very interested in what he was doing.

After the big Christmas dinner, I took some more family photos. 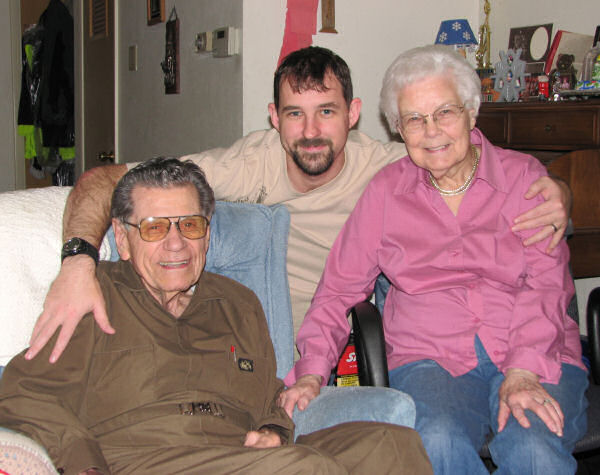 James With His Pawpaw and Granny 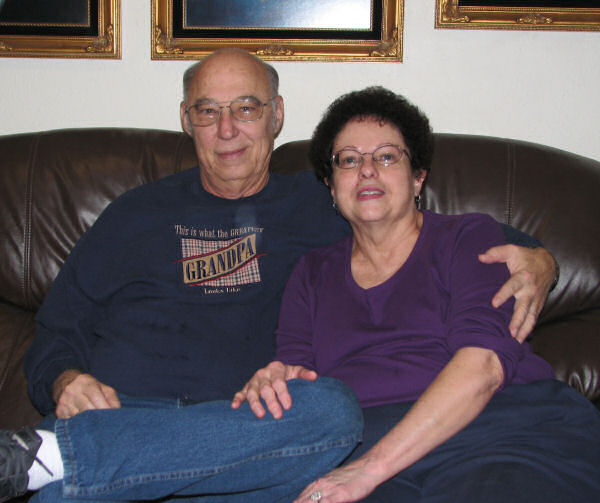 There’s even one of James and I.

Sunday was pretty leisurely. We went to church with James’ parents and had lunch at the new Genghis Grill. I then went over to my parent’s office and we walked to Manor Park to visit my grandmother. Alzheimer’s is the most depressing disease in the world. The previous time I had visited my grandmother, I hadn’t expected the Alzheimer’s to have progressed that much, so it was rather upsetting. This time I knew more of what to expect and it wasn’t as upsetting, but the disease still stinks, big time. It’s nice to know that she is well taken care of in the Younger Center at Manor Park though.

Tami, Randy and Dawson came over for dinner that night. I actually got a decent photo of Dawson and his Mom. 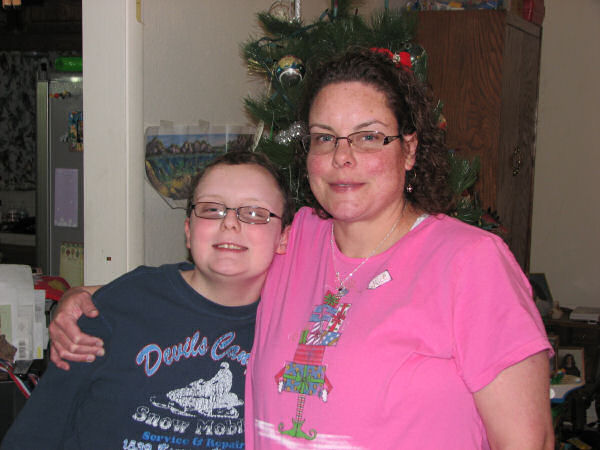 After Jessica went to sleep, James and I met up with my friend Brian. It’s sad that we both travel over 300 miles to visit  with each other when we live less than 300 miles apart (he lives in Houston).  Monday morning, we returned to Austin. It was nice visiting with family, but we were happy to be back in our own beds.

Stay tuned for more pictures from the rest of our Christmas festivities.

« Christmas Ornaments for the Kiddos
A Winter’s Tale »

3 thoughts on “Christmas in Midland”