Who is ready for the Olympics to start? Teresa, one of the Wild Princesses, mentioned that she hosts themed dinners during the Olympics to learn/celebrate a participating country. That sounds so cool to me.

Queen Wild Scraps has a new kit out today that you could use to scrap those themed dinners, watching the Olympics or participating in an Olympic winter sport. Winter Games has traditional Olympic colors, rings that you could combine to make the Olympic rings or use as frames, a variety of winter sports equipment, as well as some non-theme elements to tickle your scrapbooking fancy.

The kit also comes with a set of word bits that contain all the winter game events.

You can pick up Winter Games on sale for 50% off through January 30th. As a bonus, if you buy it between now and January 30th, you get the journal cards for free!

Here is a layout I made using Winter Games. My sister, Sarah, recently had a couples getaway weekend and they went to Steamboat Springs, CO to go skiing. I am definitely the odd duck out my siblings in that way as both my sister and brother have had couples getaways since having children where they go skiing. I’m not opposed to skiing, but I’d rather sight-see. 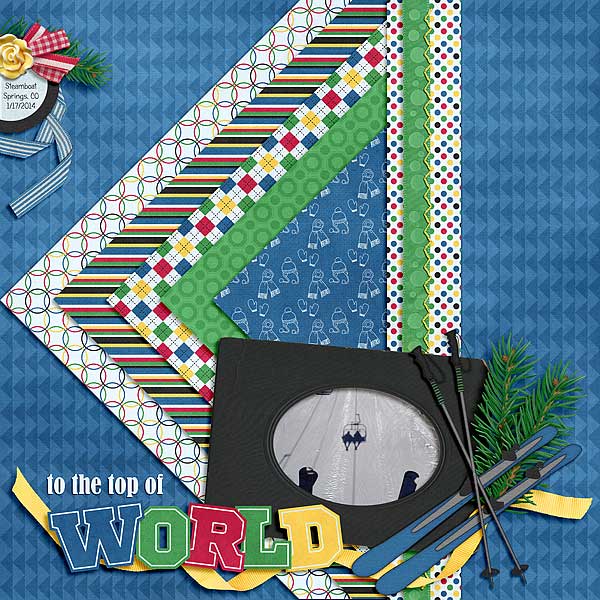 Beth has two awesome sporty layouts of her two sons. The second one is for the second template challenge over at SNP. Isn’t the mask work in the second one super?

Henriett has a fabulous layout of some in-house skeleton action using a template from The Big Picture II. I love how she stitched down the freestyle skiing word bit in her second layout.

Kendra has a great non-theme layout. Check out the fun stars.

Kristal has a sweet baby boy layout. Check out her fabulous clustering.

Lyndee has layout with her adorable daughter as the big winner.

Teresa, our Olympic junkie, has a layout about visiting Olympic Park in Utah. Check out how she threaded the medal ribbon through her title.

Tina has an awesome non-theme layout about the most magical place on earth.

We’d love to see what you create with Winter Games. Be sure to share in the Queen Wild Scraps gallery.