This year, I decided I would sew Jessica’s birthday outfit myself. I did a bunch of web browsing for ideas and decided I wanted to make pants out of a Curious George fabric and a solid top with a Curious George applique. I spent quite a bit of time searching for Curious George fabric that was cotton. It seemed that all the options I found were flannel, which is more suited for pajamas, but I finally found some. The applique didn’t require quite as much searching. I ended up purchasing it from The Sew Princess. Technically, she doesn’t list just the appliques in her store, but she had the best George applique on her custom outfits and I asked if she would sell just the applique and she worked with me.

Since I had never sewn a garment before, I decided to test out my skills using a green floral fabric. It went much smoother than I anticipated, even with adding sleeves to the sleeveless pattern I decided to use. Thanks to my MIL Olivia for explaining how to read/follow a pattern and to Jillan for sleeve help. I had intended to have Jessica wear the green outfit so I could ensure I had proper sizing, but Jessica can be quite adamant when it comes to clothing and I could never get her to wear it. I went ahead with the party outfit and it did end up being too large, but better too big than too small. I ended up running out of time on the shirt, so Jessica just wore the pants with her party favor shirt at the party. The shirt gave me a lot of frustration. I don’t know if it was the fabric or what, but I ended up having to rip out the stitches for gathering the sleeves like three times on each sleeve. It was quite annoying. I did end up finishing it in time for Jessica’s two year portraits taken the Monday after her party. Overall, I was quite happy with how it turned out and I’ve already started my next sewing project. 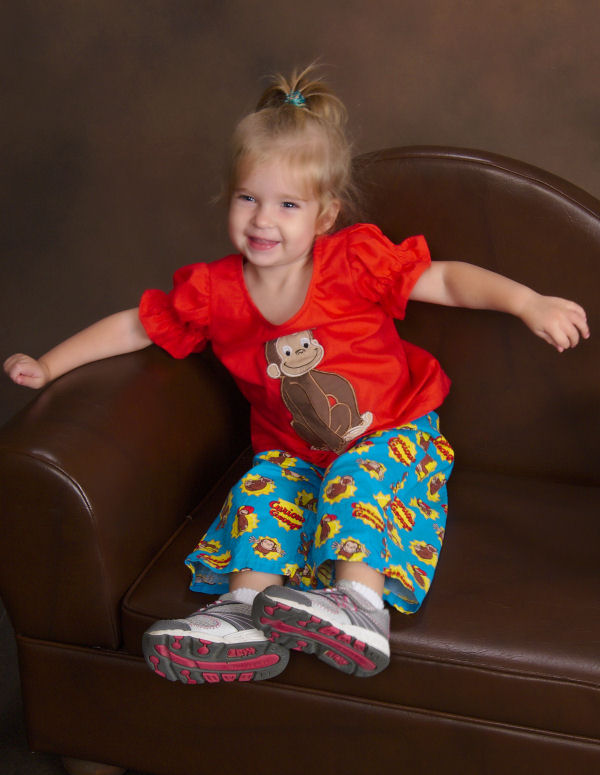 Jessica in Her Birthday Outfit 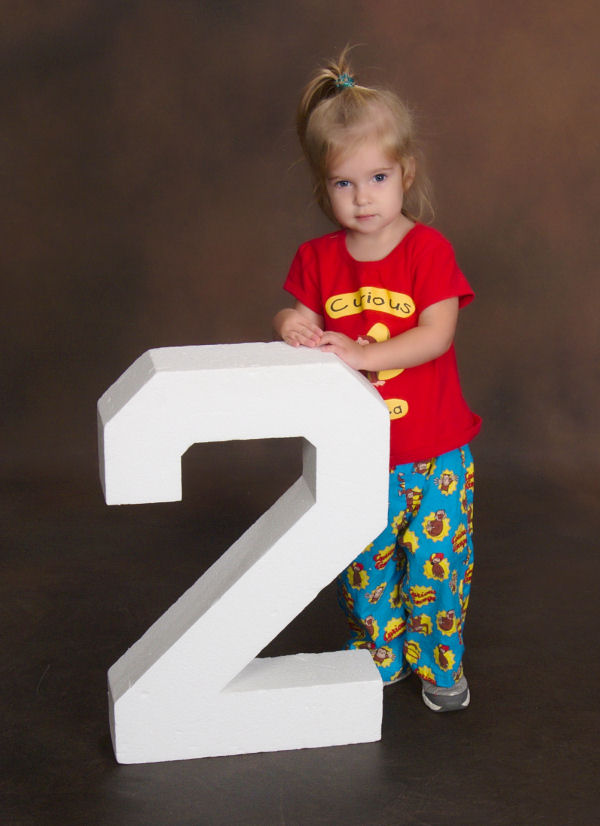 When I first started thinking about Jessica’s 2nd birthday party, I knew exactly what I wanted to do for the party favors, a Curious George t-shirt personalized for each of the twelve kiddos invited to the party. Here is our nephew Dawson modeling the finished product. 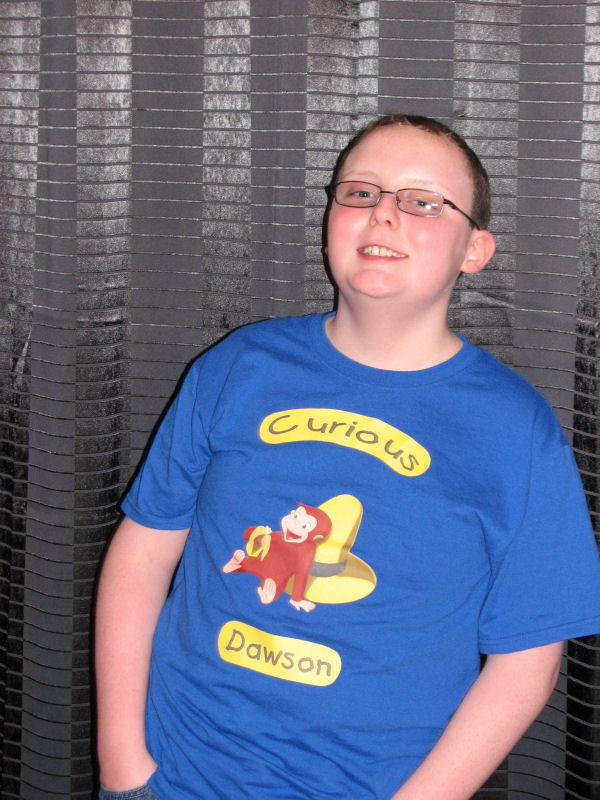 Like the the invitations, the party favors required a bit of graphics editing. They started with a desktop wallpaper of Curious George that I was able to download off as bonus material from a Curious George DVD that we own. I then removed the background, but unlike the invitation images, I didn’t have to be as particular about the smoothness of the image since I would be cutting it out anyway. Using my digital scrapbooking software, I set up the curved “Curious” and kids’ names as well as the George image to maximize space on the dark material heat transfer paper I picked up at Staples, which seemed to have the best price of the all the nearby office supply stores. My friend Lori was then nice enough to let me print the seven pages of transfer paper on her inkjet printer. This is one instance that it would be nice to still own an inkjet printer.

I then purchased red and blue t-shirts from Michael’s and Hobby Lobby. For future reference, Michael’s does not seem to carry any sizes smaller than youth small, but Hobby Lobby does carry youth x-small, hence why I shopped at two stores as I needed eight youth x-small shirts. After cutting out all the transfer pieces, I ironed them on the shirts and viola, awesome party favors that I got most of the kiddos to put on once they arrived at the party. I also sent the kiddos home from the party with a balloon that did double duty as a party decoration and Curious George temporary tattoos.

Go here for the post regarding the invitations. Stay tuned for more posts. I still need to share the birthday outfit I made her and of course photos from the actual party.

This year for Jessica’s 2nd birthday party, I decided to go with a Curious George theme. Curious George was the first show I let her watch on TV and she would point to the TV and say George. I’ve since added in a few other shows that I will let her watch, but she is still a big fan of George.

I started working on the birthday invitations at the end of July, thinking that would allow me enough time. I started with a free coloring sheet of George decorating a birthday cake. I turned it in to a png image with a transparent background, which required quite a bit of work and way more time than I thought since I was erasing white pixel by pixel around George. 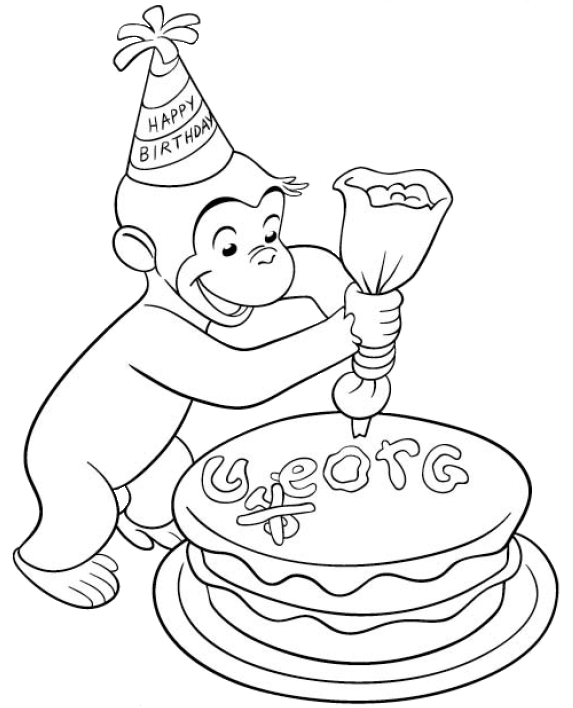 Then I colored the image, which took even more time. 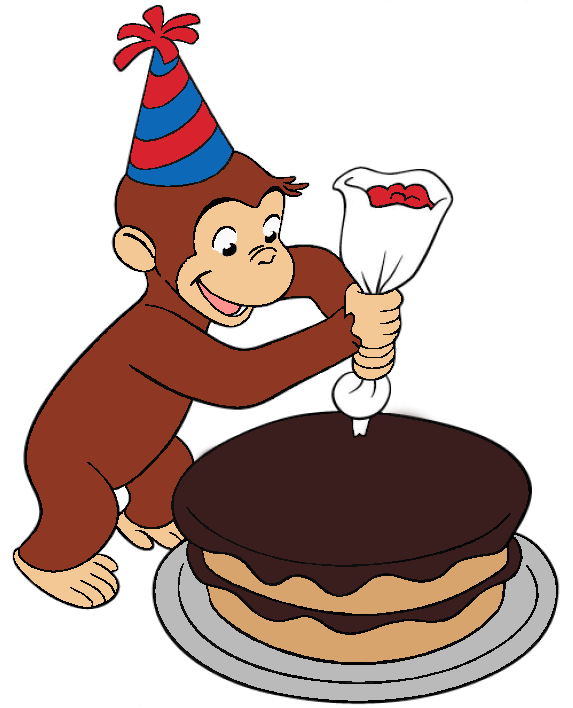 I am definitely not a graphic designer by any means. I feel that all my work shouldn’t be limited to just Jessica’s birthday, so feel free to right click on the images and save for your personal use.

Once I had George colored to my satisfaction, I used my digital scrapbooking software to create the two-part invitations. The first part, I had printed as 4×6 photos at Costco. The second part I printed on white cardstock on my laser printer at home and cut to 4×6. This allowed me to send the first part to some family members, like James’ grandparents who don’t travel anymore and wouldn’t need the full invitation. 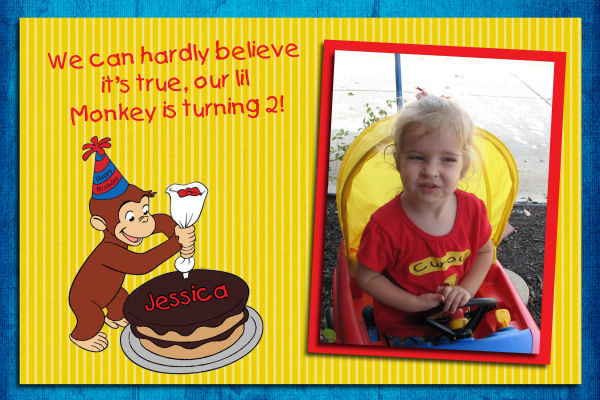 Stay tuned for more posts regarding Jessica’s party. I can’t wait to share the birthday outfit I made her as well as the cute party favors I made for all the kiddos and of course photos from the actual party.

The Saturday before Thanksgiving, our friends Ranger and Clarisse hosted a “Wii Would Like to Play” party. We showed up a little late since it started during Jessica’s naptime. We arrived just as the quoit action was about to start in the backyard. I had never heard of quoits before, but it is a game somewhat like horeshoes that is prevalent in New Jersey where Clarisse and her brother Eric grew up. A quoit is the heavy metal ring you toss. Lori and I were the only adults who didn’t toss a quoit. Lori was the scorekeeper and I was the Jessica wrangler.

Phap, Linette and Ranger Getting Psyched to Throw Some Quoits 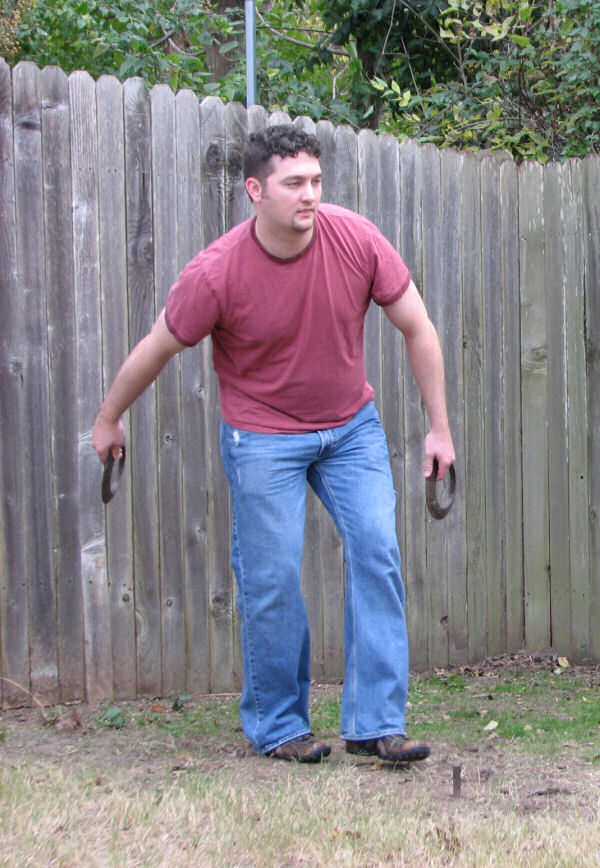 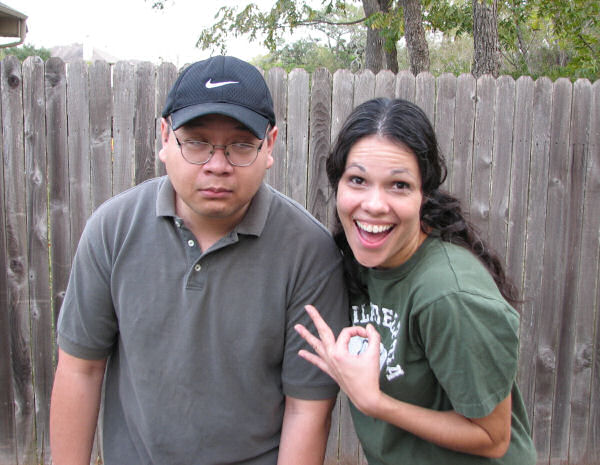 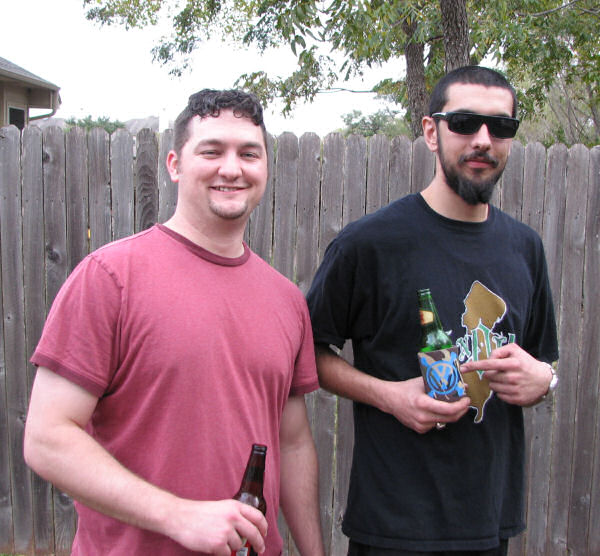 The second match was between Team Gibbletz, which consisted of Ranger’s sister Linette and her husband Mike, and Team Lamb Chopz, which consisted of James and Ranger.  I’m not sure where the teams came up with their names. I’m guessing you can tell the outcome of that match based on their team photo, although it was a much closer match at 21 to 18. 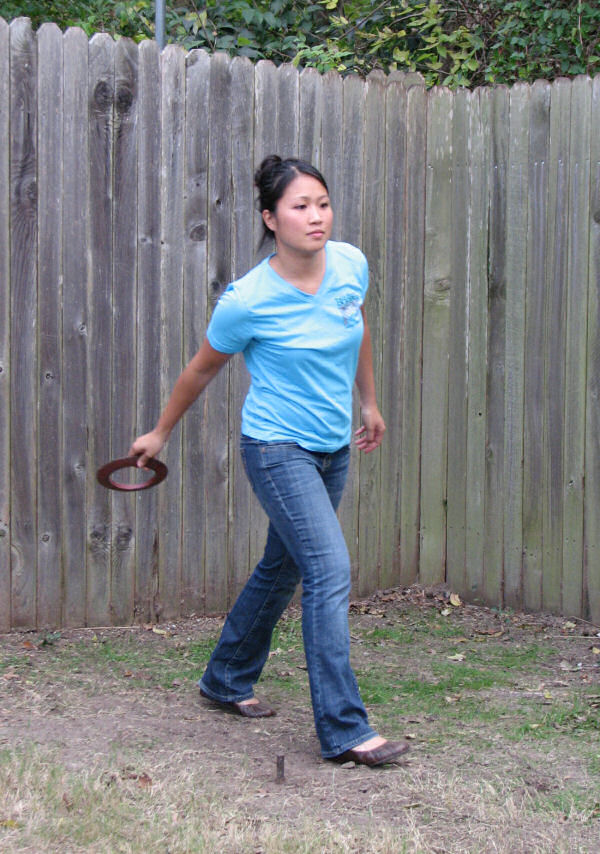 Apparently the Lam genes bring out the seriousness when tossing the quoit. 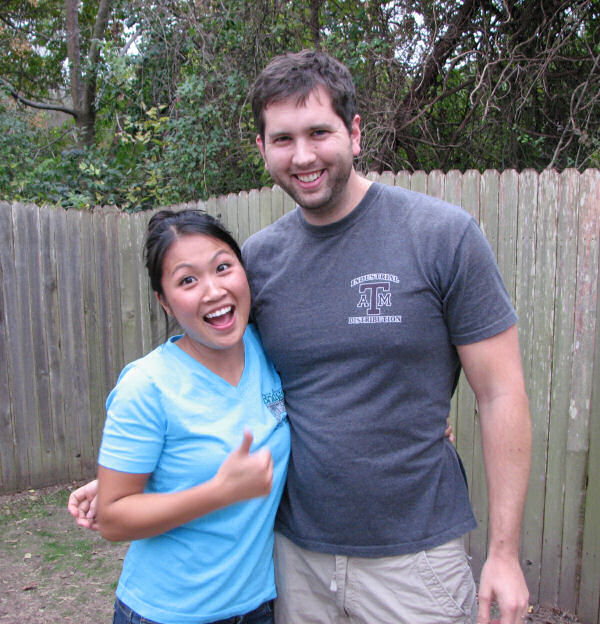 The final match was a showdown between the two winning teams. It actually got kinda exciting. Team 609rz beat Team Gibbletz 21 to 14.

During all the quoit action, Jessica enjoyed a cookie and enjoyed dragging her sippy cup as she crawled around on the ground. 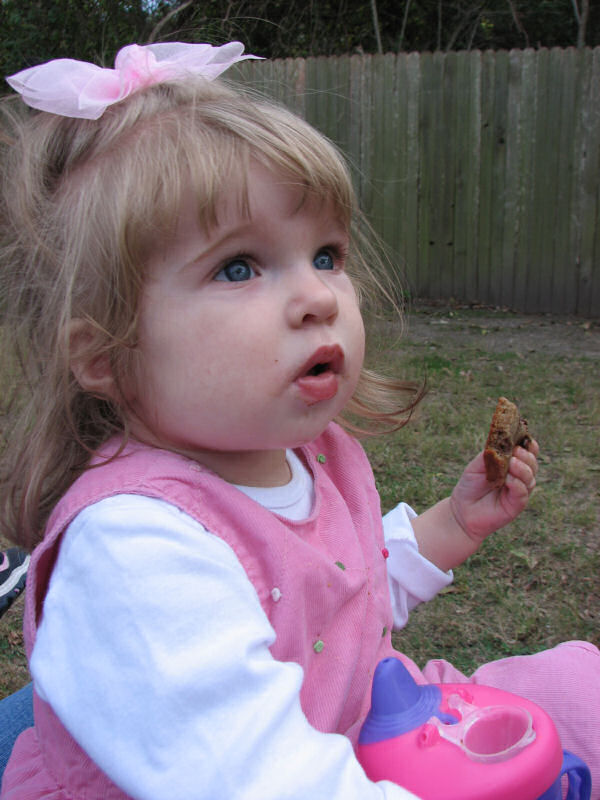 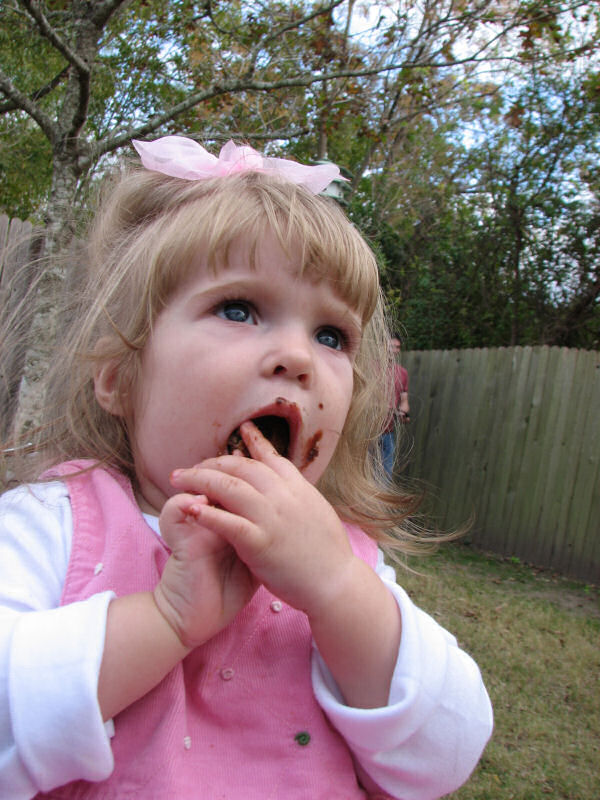 "I'm having fun getting dirty."

We then took the competitive action inside for some Wii sports. I love the sword dueling, even if I’m not the best.

Did you notice Lori, Linette and Mike smiling at the camera in the background?

While we dueled to exhaustion, Jessica explored the diaper bag by taking every single item out of the section I had left unzipped. 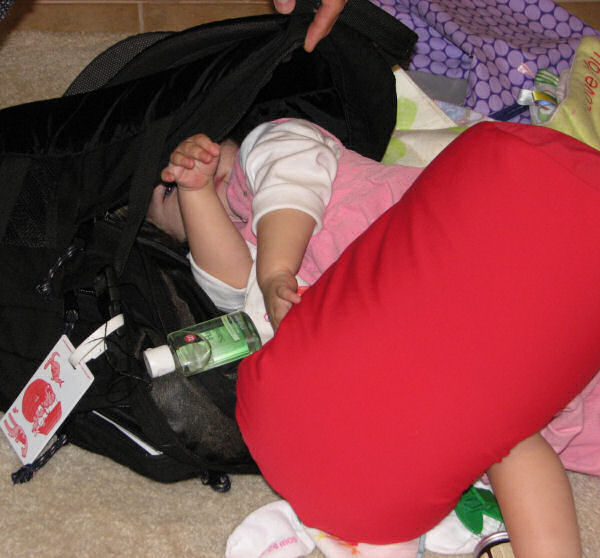 Jessica in the Diaper Bag

She also enjoyed playing/crawling all over Linette. Jessica really took a liking to Linette. 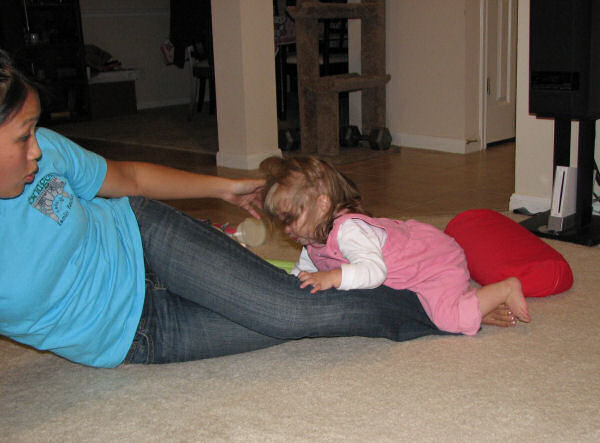 Overall, the party was a ton of fun. Hopefully, we can do something like that again soon.

The night before Halloween, we went to a costumed Halloween party at our friends Aric and Kristy’s house. Kristy went all out. Halloween is her favorite holiday and she had lots of neat decorations. 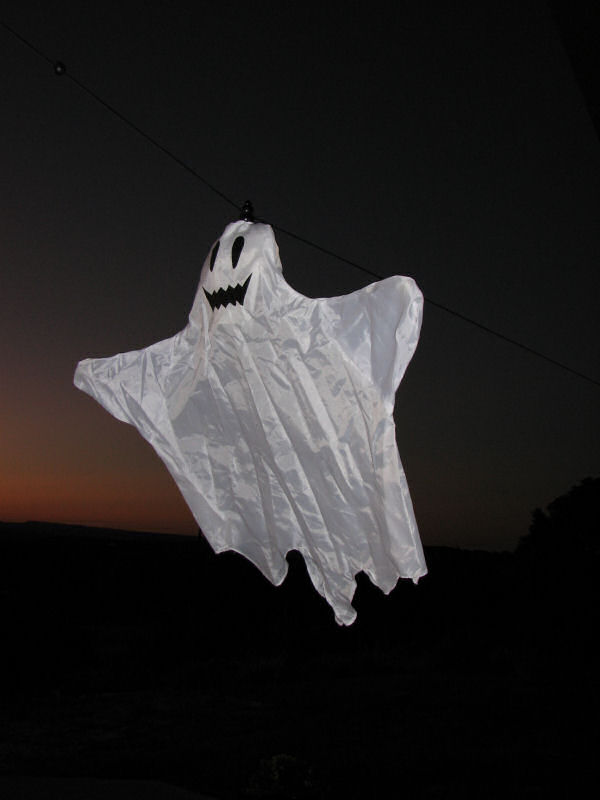 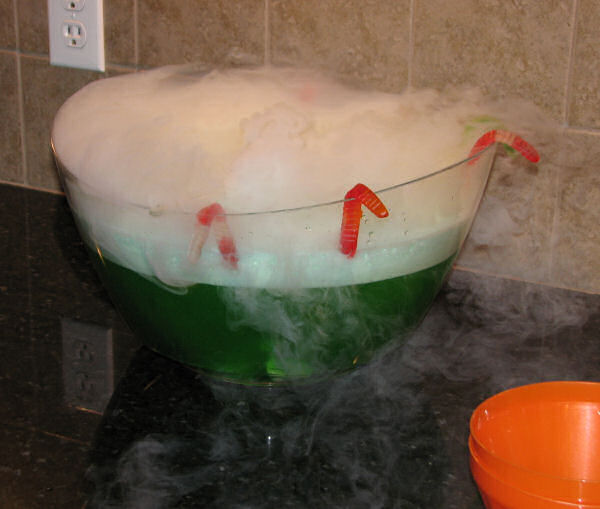 I had offered to make something for the party and she asked if I could make these Severed Toes in Bandages. They turned out super cute and really looked like severed toes wrapped in bandages. Plus they were a breeze to make. 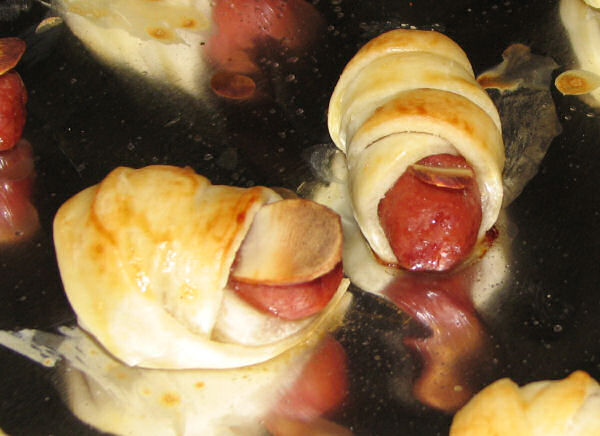 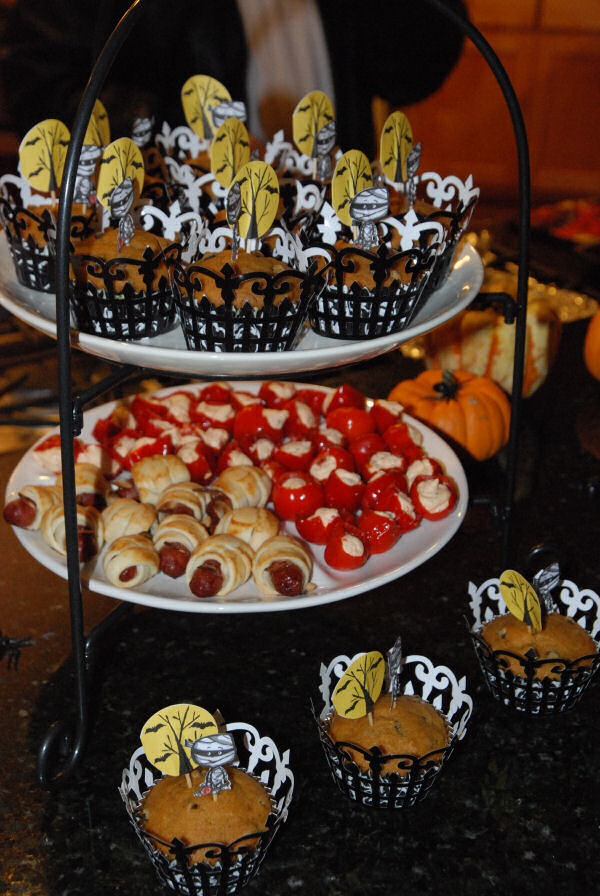 Some of the Food

Our hostess with the mostness dressed up as a 50s pin-up girl. 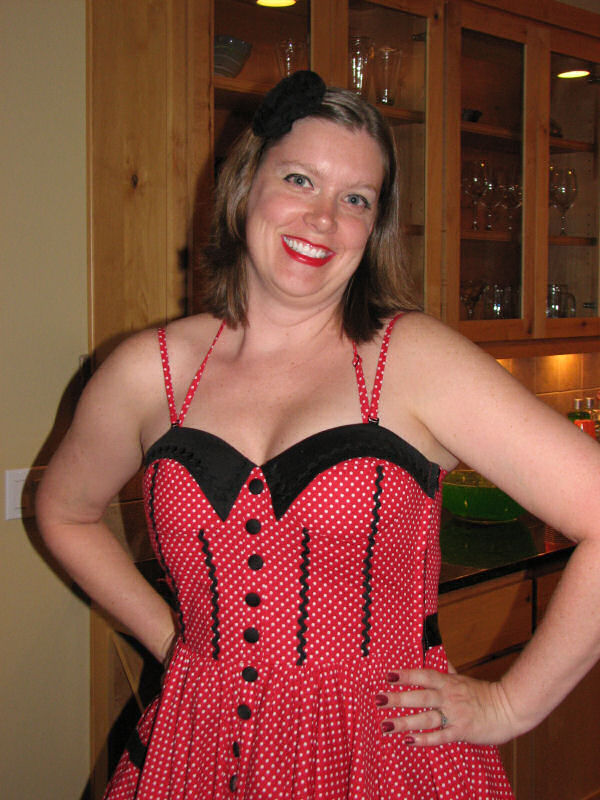 Every costume party has to have an Army couple. I wonder if real Army people ever wear their uniforms to costume parties? Probably not. 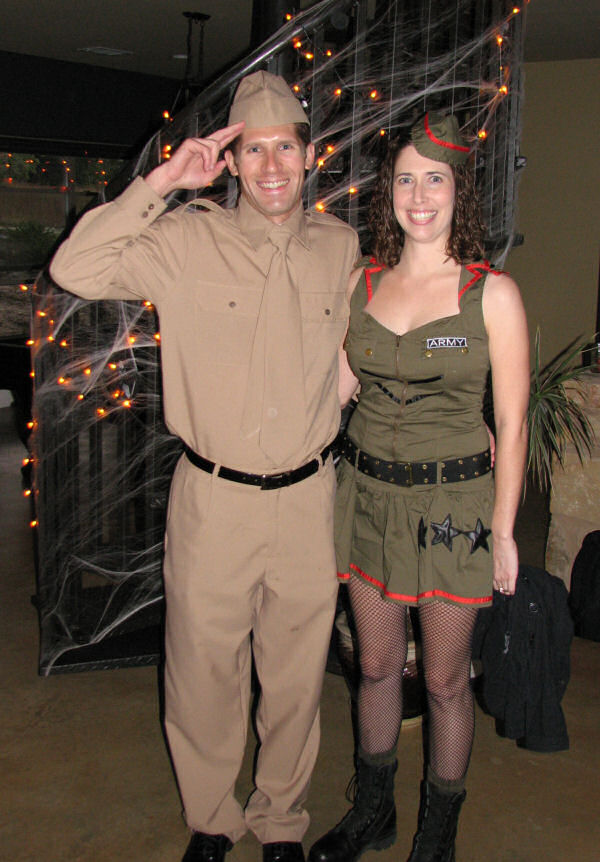 Jessica got to show off her cow costume. James and I dressed up as farmers to take care of our little bovine. 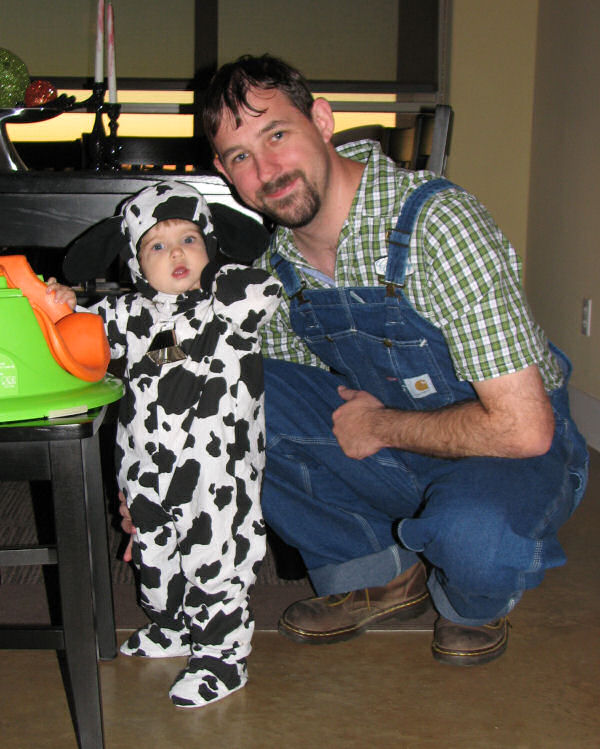 "It's much better without that hat." 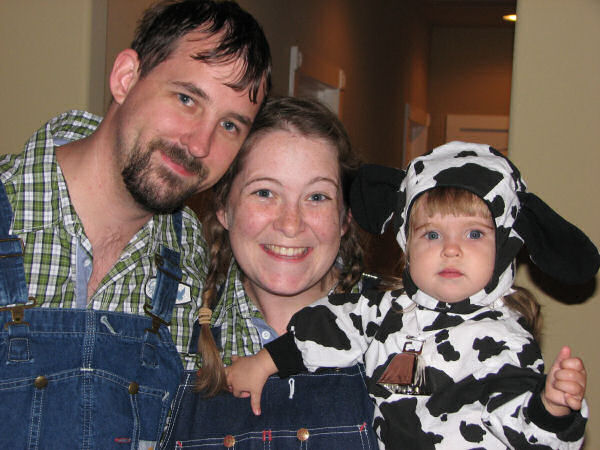 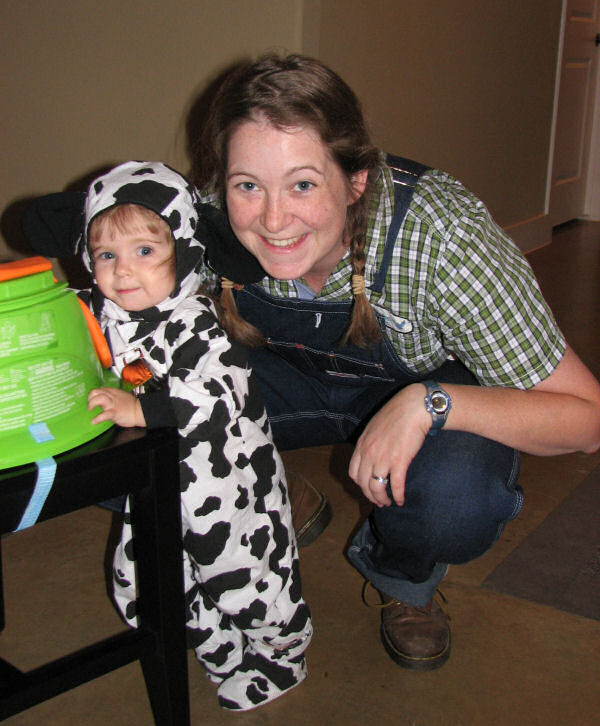 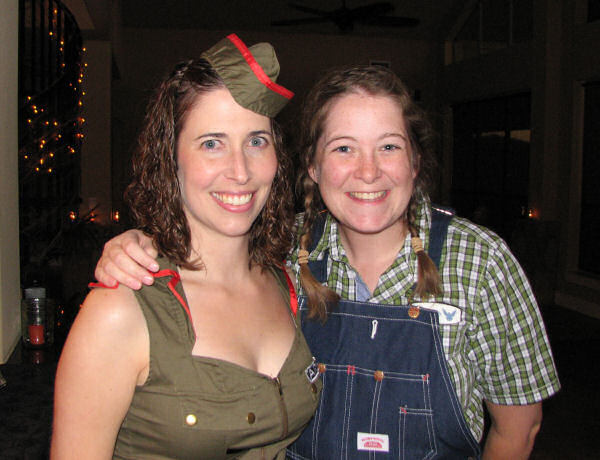 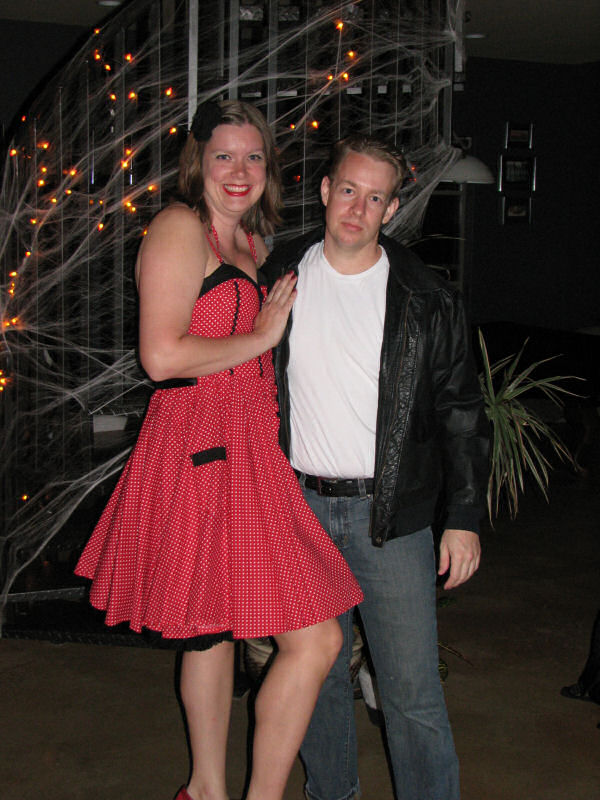 Dalton was a martial arts master.

Diane, Kristy’s mom, came as a doctor and her pooch Marley was a skunk.

Anthony and Jenna were co-hosts of the party. Anthony was a vampire and Jenna was a dark angel or maybe she said death angel. Jenna made all the tasty cupcakes at the party. 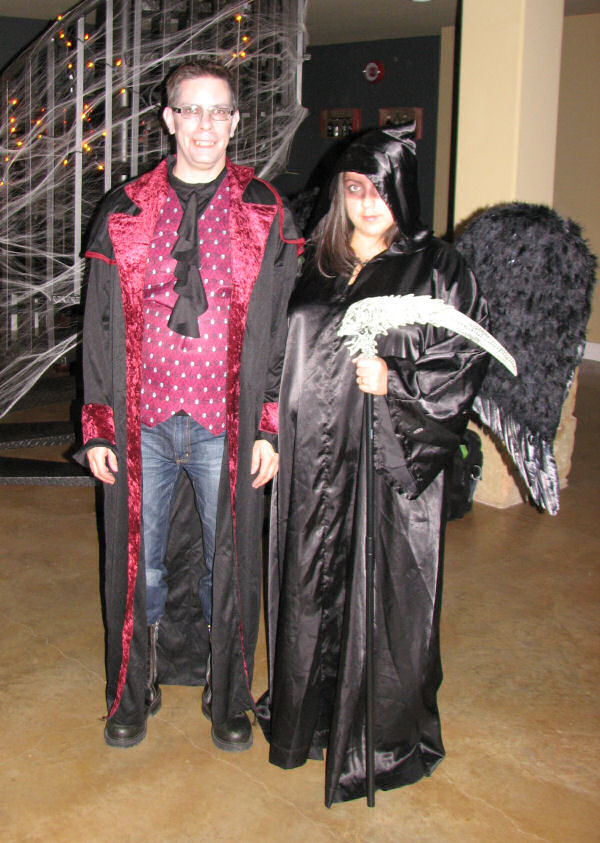 Jessica got to play with a little dinosaur at the party. Christopher dressed up, but his parents Jeremy and Megan did not. 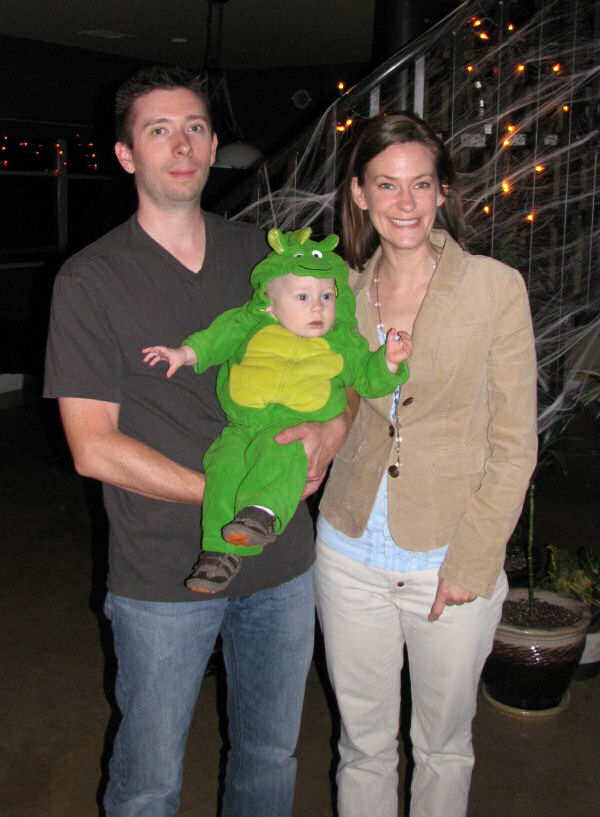 I’ll leave you with one last picture of my little cow and her Daddy outside by the pond. 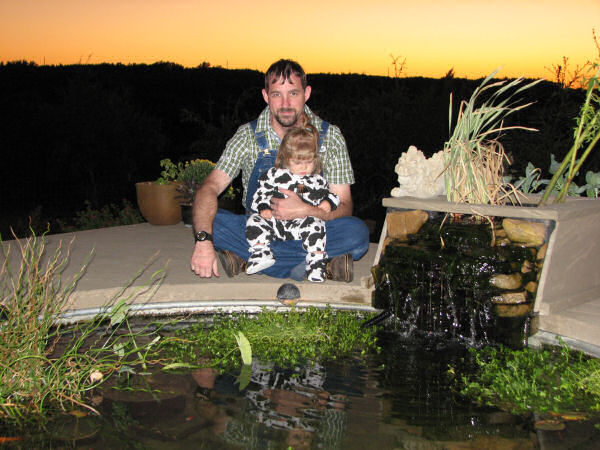 Daddy and his Little Girl