I have started watching Sandra Lee’s Money Saving Meals. I love how she makes delicious looking food and she tells you how to save money doing it. When Justin visited a few weeks ago, I decided to try out her chicken fried steak with sawmill gravy. Now I’m not a big gravy fan and I would prefer not to slather my food in anything, but THIS GRAVY IS TO DIE FOR. The gravy recipe is true keeper in my book. I also tried her round 2 recipe, cheddar biscuits and gravy, but I wasn’t the biggest fan. The biscuits seemed a little dry. Of course, I cheated and heated up the gravy in the microwave so maybe that made a difference. 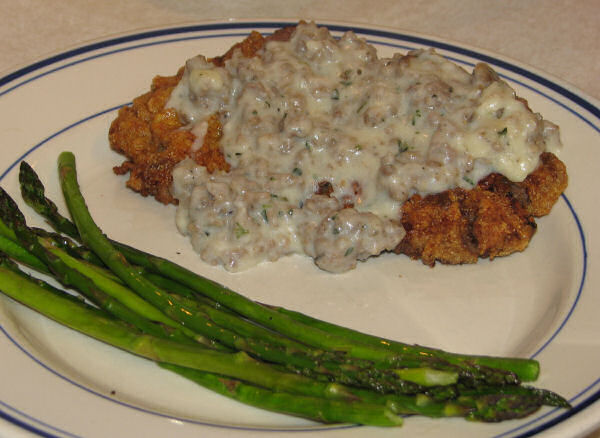 In a pie pan, whisk together the egg and milk. In a second pie pan, combine the flour, cornmeal, paprika, and cayenne, salt and freshly cracked black pepper, to taste.

Season the beef with salt and pepper and dredge the steaks in the flour mixture. Shake off any excess, then submerge them in the milk and egg. Dredge them again in the flour mixture. Make sure both sides are well coated with the egg mixture before dredging them for the second time. Dust off the excess flour and set aside.

Heat the oil in a deep skillet (I used my cast-iron skillet) over medium high heat. Add the steaks and fry until their coatings become golden brown and crisp, about 3 to 5 minutes. Remove them to a plate lined with a brown paper bag or paper towels to drain. Arrange them on servings plates and serve with the Sawmill Gravy.

Brown the sausage in a cast iron or heavy-bottomed skillet, over medium heat. When fully cooked, remove the sausage from the pan and set aside.

In the same pan, over low heat, add the canola oil. Whisk in the flour and cook, constantly stirring, until the flour turns a pale golden color, about 5 minutes. Slowly whisk in the milk and thyme and bring to a simmer. Cook, stirring occasionally, until the gravy has thickened, about 5 to 10 minutes. Return the reserved sausage to the skillet and season with salt and a generous amount of black pepper. Serve alongside the Chicken Fried Steak.

Yield: 4 + (I reserved 1 cup for the Cheddar Biscuits and Gravy)

A few weeks ago, I wanted something quick to make for dinner. This is the result, Cheesy Beef Pasta. James enjoyed it, so I will be making it again.

In skillet over medium-high heat, cook beef and onion until beef is browned, stirring to separate meat. Add soups, water and Worcestershire sauce. Heat to a boil. Stir in pasta. Cover and cook over low heat 12-15 minutes or until pasta is done, stirring often. Sprinkle with cheese. 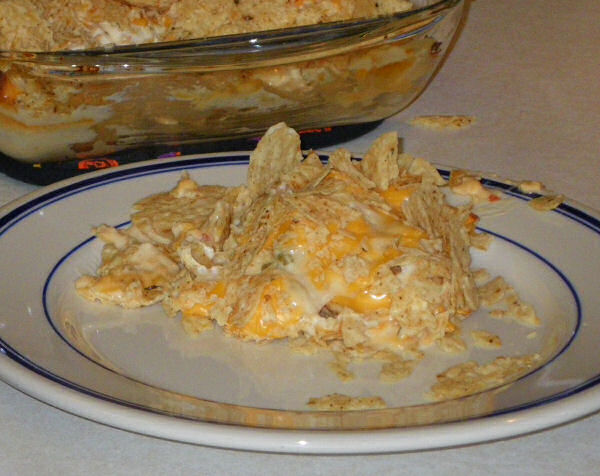 In a bowl, combine the soup, sour cream, taco sauce and chilies. In an ungreased shallow 2-qt. baking dish (I used a square baking dish), layer half of the chicken, soup mixture, cheese and tortilla chips. Repeat layers.

A few weeks ago, I made this utterly delicious Choco-Holic Cake for my friends when we got together to make cards for the troops.  I actually didn’t make the glaze, as I had run out of time, but the cake was still delicious and so moist. I found the recipe on one of the baking sites I like to go to, VeryBestBaking.com. You can set up an account and put recipes in your recipe box for later perusal.

A few nights later, I made Chicken Pasta Toss for dinner and it turned out beautifully. We enjoyed it and James said I could make it again. That’s a big thumbs up from my picky husband. 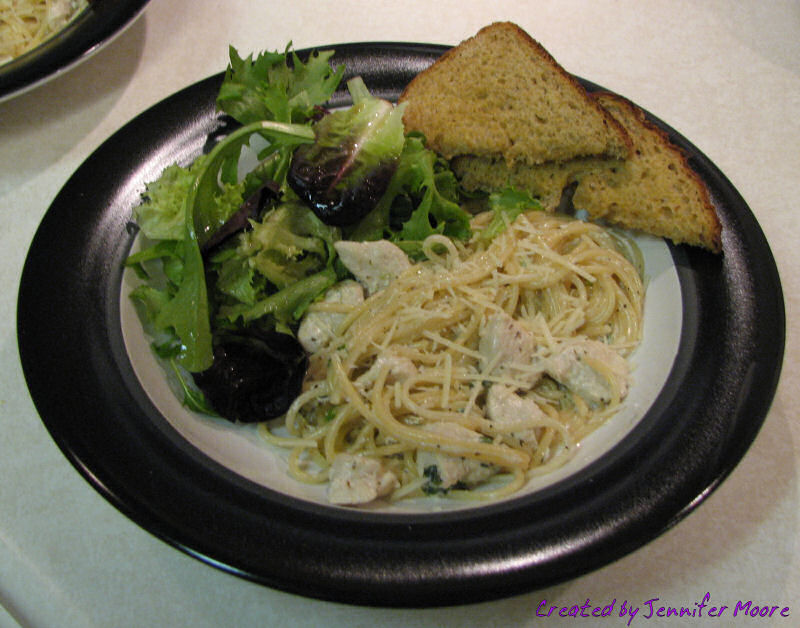 Cook the spaghetti according to package directions. Meanwhile, in a large skillet, saute garlic in butter. Add chicken, onions and seasonings; cook, uncovered, for 3-5 minutes or until juices run clear.

Stir in cream. Bring to a boil. Reduc heat; simmer, uncovered, for 4-5 minutes or until slightly thickened.

I subscribe to posts at Is My Blog Burning, a foodie blog resource. That is how I found out about the Cook’s Book Club hosted by Meena. I finished May’s book mid-month and even cooked a dish inspired by the book the last week of May, but I’m late posting about it, so probably too late to be included in the round-up, but oh well. I really enjoyed the book and I think will need to search for more titles by the author at my public library.

Serving Crazy with Curry by Amulya Malladi is about a family coming together. It starts with Devi, the main character, attempting to commit suicide, but her plan is foiled when her mother Saroj, who has a key to her rented townhome, lets herself in when Devi doesn’t answer so that she can put some mangos in the refrigerator. After leaving the hospital, Devi comes to live with her parents to recover. Not wanting to answer the questions her family is sure to ask, Devi decides not to talk. Instead she starts cooking in her mother’s kitchen. Saroj doesn’t like it, as the kitchen has always been her domain, but she doesn’t do anything about it as she doesn’t want to risk pushing Devi over the edge again. Devi cooks a fusion of south Indian food and a mix of whatever she feels like. In turn, her family rallies around her, enjoying her kitchen creations. They each discover that how they previously defined success and failure aren’t accurate.

Part of the Cook’s Book Club was to cook/bake a dish inspired by the book. Most of Devi’s kitchen creations are Indian fusion dishes, so I thought I’d make make Devi’s Cajun Prawn Biriyani. Never having cooked Indian food before and being fairly limited to taste-testing Indian food, I needed help. So I googled biriyani and came across Route 79‘s Chicken Biriyani dish, which was very useful. Devi’s recipe in the book listed ingredients, but no measurements, so using Route 79’s recipe and my best guess, I came up with the following. 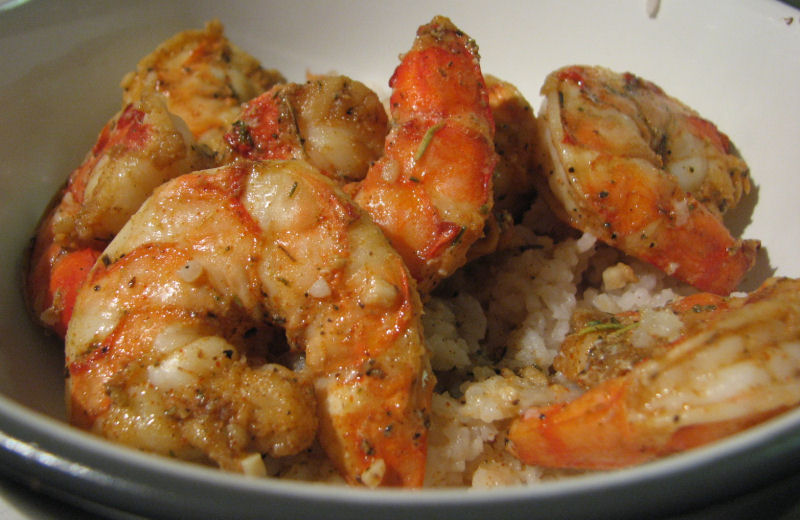 Meanwhile, melt remaining butter in large skillet. Add prawns, cook for approximately 3 minutes on each side. Serve over rice

Overall I wasn’t impressed by the dish. The prawns were too spicy for my liking, but not bad. The rice wasn’t what I was expecting and overall I didn’t care for it. My husband, who loves shrimp, didn’t give his nod of approval for a repeat of this dish in our house. I think I will try basmati rice again (partly because I have some left from my purchase), but I think I will try a more traditional recipe next time.

The book had a list of reading group questions at the back, which I think is really cool. Below is #8.

8. How does the relationship between Saroj and her mother, Vasu, compare with the rapport Saroj has with her own daughters. Why does Saroj resent her mother? What is her attitude toward her father?

Saroj and Vasu have a relationship that has a lot of bitterness. Vasu divorced Saroj’s father when she was quite young, because he abused her. Back then divorce was unheard of in India. Saroj’s father committed suicide and so Saroj never really knew her father since he died when she was only 5. All her life, Vasu tries to make Saroj remember the bad things about her father, but it is almost like the more she tries, the more Saroj wants to remember the good things about her father. Later, Vasu starts a lifelong affair with a married man. Saroj resents her mother for this, because Vasu always put her love for Shekhar over the love she had for Saroj. Saroj wants to have the relationship with her daughters she never had with her mother. She stays at her home with her family, not working outside the house like her mother, so she can take care of her family and be there when they need her. It doesn’t work quite as planned, since Devi and Shobha harbor resentment of their mother as well.