James and I wanted to take a little getaway. The last trip we took just the two of us was in November 2008. Initially, I was thinking Orlando and Universal Studio’s Harry Potter World, but James wasn’t sure. So I looked to see which Southwest Airlines destinations had inexpensive flights. San Jose was the winner with non-stop low-cost flights.

I am breaking down the posts detailing our trip into a post per day of our trip, yet I’m still very picture heavy. It’s hard to pick just a few when I took so many. This post has 39 of the 202 pictures I took on day 1.

We left our house in Austin at 6 AM CST when the temperature was in the 20s. We arrived at San Jose International Airport at 9:25 AM  PST where the temperature was probably around 60°F. A free short  VTA shuttle took us to the Santa Clara Caltrain Station. From there, we took a local train to the end of the line in San Francisco. I enjoyed the approximately 1.5 hour ride. It was relaxing and the scenery was nice. A lot of the stations we stopped at along the way had neat old buildings.

James Waiting for Our Train

Jennifer on the Train 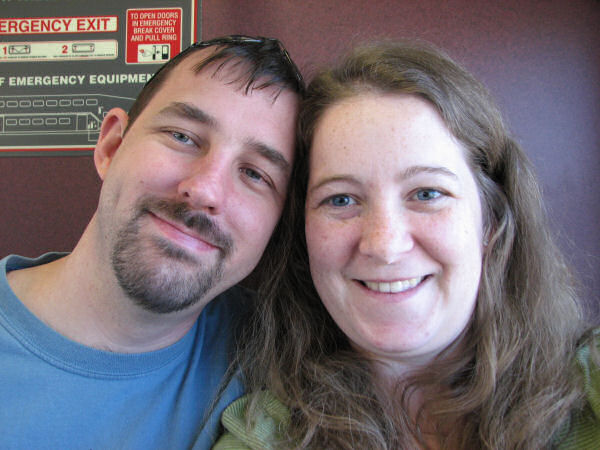 James and Jennifer On the Train

We ate lunch at Farmer Brown’s Little Skillet, near the San Francisco Caltrain station. James had a bbq pork sandwich and I had a 2 piece chicken box. I kinda wish I had ordered the bbq pork sandwich also. The slightly sweet coleslaw on it complimented the bbq pork. The kiwi lemonade was really good too. If you try Farmer Brown’s, keep in mind there is no seating. You just order out of a window in the building. Across the street (almost like an alley) there is a raised loading dock where we sat at to enjoy our lunch. It must be a really popular spot as there were a lot of people standing around waiting for their food to be ready.

We then took the MUNI light rail to Halladie Plaza to visit the San Francisco Visitor Center and purchase/validate our CityPASS. I definitely think the CityPASS was worth it. Even though we only used four of the six tickets, we saved $31.90 per person over purchasing the activities we did do at their respective ticket booths. The MUNI 7-day pass was probably one of the best values of the CityPASS. One cable car ride costs $5 and we rode the cable cars three times plus numerous bus rides (normally $2 a ride), so even if you don’t do the CityPASS, a $26 MUNI pass is definitely something a San Francisco visitor should consider.

Unfortunately, after leaving the Visitor Center, I got turned around as to where Market Street was located and we just kept walking. We walked the 15 blocks to our hotel, the Holiday Inn – Golden Gateway. Except for the fact that we had to walk through a questionable part of town, the Tenderloin, it wasn’t too bad of a walk. As a Priority Club member, they let us check in about one hour early and they honored my request for a room near the top of the high-rise hotel. Our room was on the 23rd floor (out of 26 floors) facing east. We had some fabulous views. The hotel room had a little mini fridge and was tastefully decorated. Our room was adjacent to a vending and ice machine and we didn’t hear noise from people using them, so there was good sound proofing. Here’s a picture of James and our view. I should have used a flash, but oh well, can’t redo the picture now. And no, the sky was not smoggy, the hotel window was dirty, although looking out of it, the window didn’t seem that dirty. However, the camera definitely captured the spots.

James in Front of our Hotel View 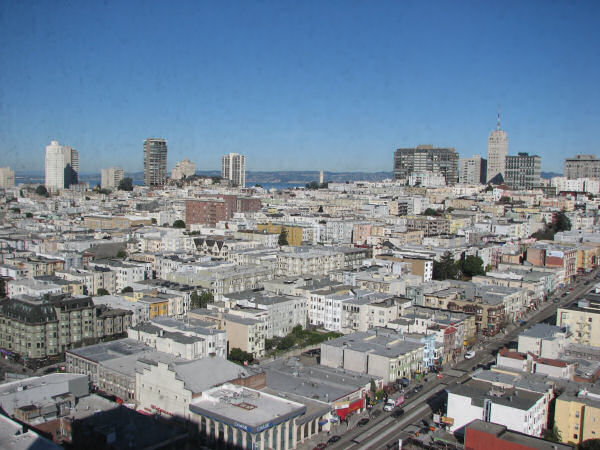 After taking a break in our hotel room, we set out to ride a cable car to Fisherman’s Wharf. The California cable car line ends just one block from our hotel; however, repair on the line started in January, so we walked a few blocks to a stop for the Powell-Hyde line and rode it to the end of the line.

From there, we walked along Embarcadero to Pier 33 where we boarded a boat, the Alcatraz Flyer, to Alcatraz Island. I had bought the tickets online so, we didn’t have to wait in line to purchase tickets, just to board. Although not technically part of the CityPASS, they will take your Blue & Gold Bay Cruise ticket for the day tour. We took the night tour that departed at 4:20 PM and arrived back at Pier 33 7:30-7:45ish. 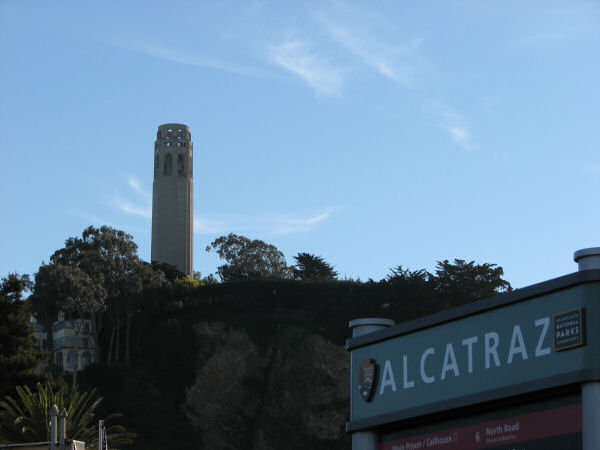 View of Coit Tower While Waiting to Board Alcatraz Flyer

Did you know the Bay Bridge is comprised of three separate bridges? The two suspension bridges connecting San Francisco to Treasure Island meet in the middle at a man-made concrete island (you can see it in the picture below).

Sea Gull That Flew Just Over Our Heads

Alcatraz Island is named for the pelicans that once inhabited the island. The lighthouse (pictured prominently in the two below photos), the first in operation on the Pacific coast, first lit the bay in 1854 and continues to shine today after being automated in 1963. The lighthouse structure you see today was built in 1909. 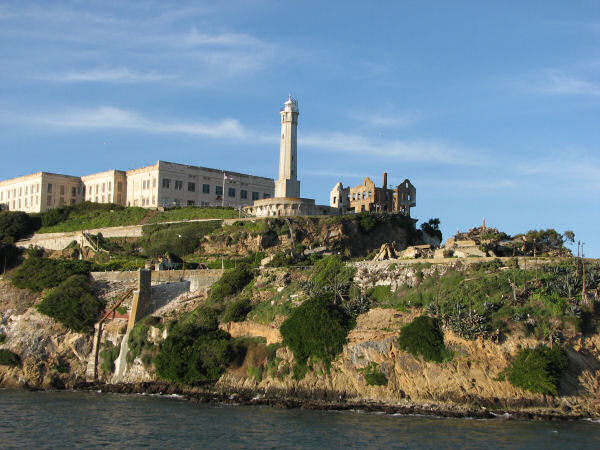 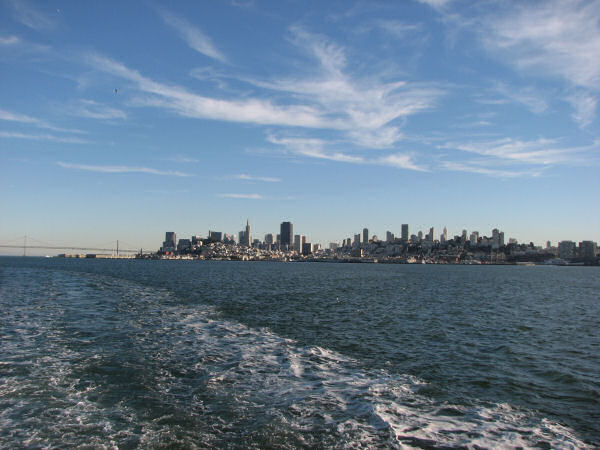 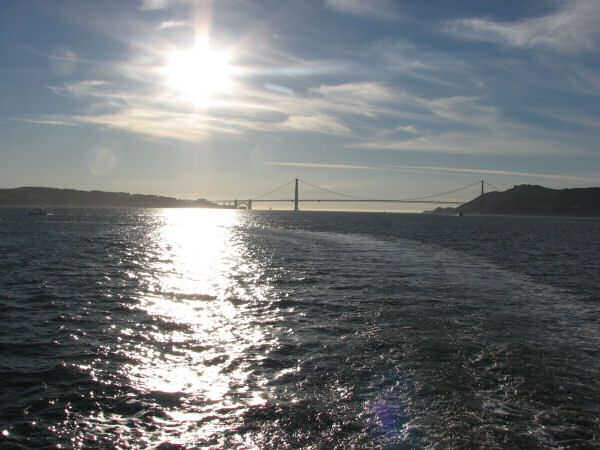 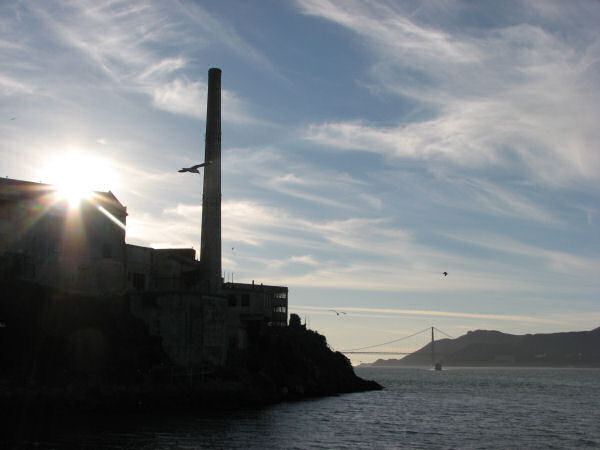 Prior to becoming a federal penitentiary, the island served as an Army fortress and military prison. The building behind the watch tower seen in the below photo served as barracks when occupied by the military and then as housing for the penitentiary guards and their families. Yes, children lived on the island and commuted by ferry to go to school in San Francisco.

I have to say that I immensely enjoyed the audio tour. It included voices of both former guards and prisoners. 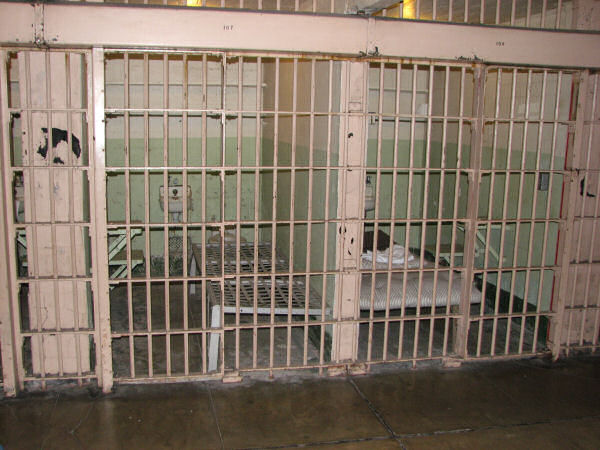 The sunset views from Alcatraz Island were phenomenal. Make sure you click on the pictures to view them larger. 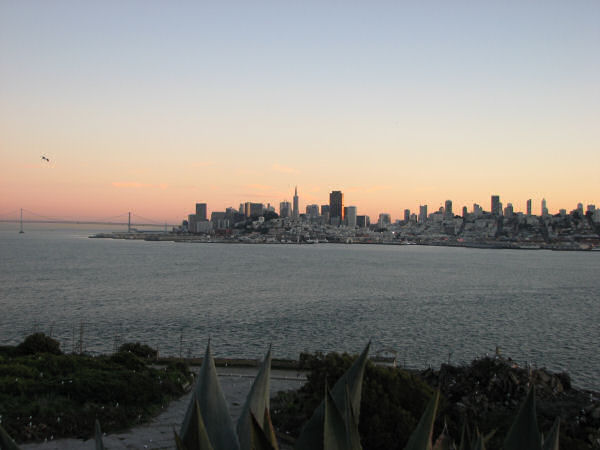 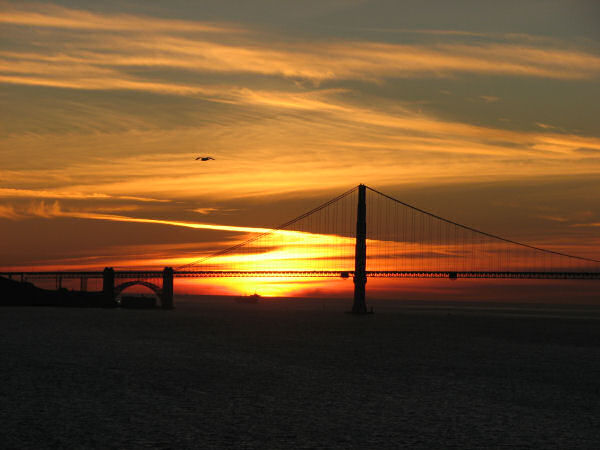 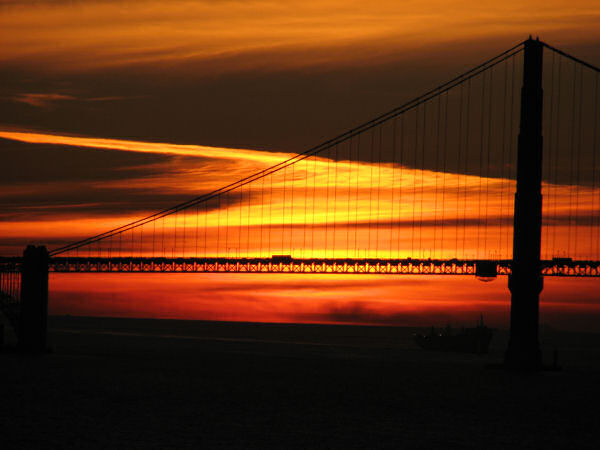 We were able to visit the hospital area of the penitentiary. 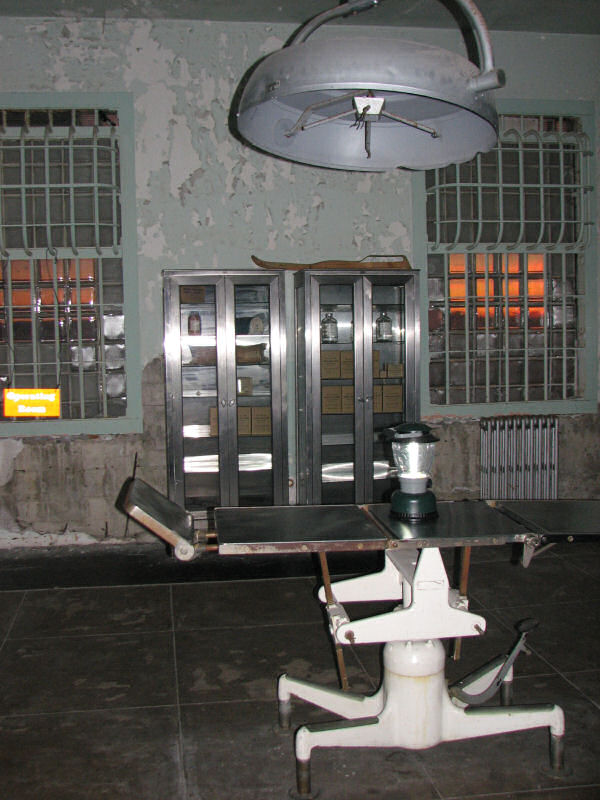 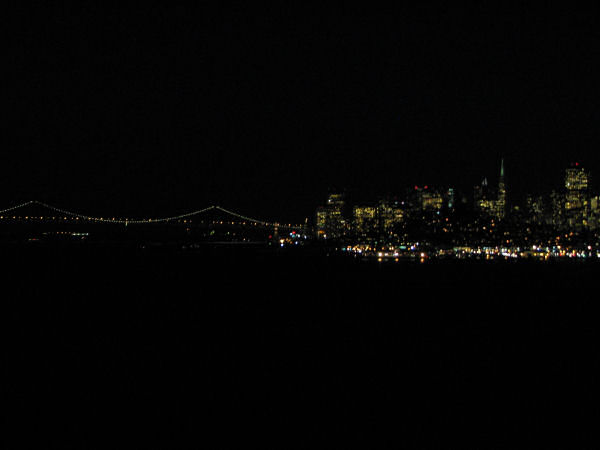 To enter and leave the penitentiary, one has to go through the fortified sally port, a passageway with a heavy, iron-studded wooden door at each end. 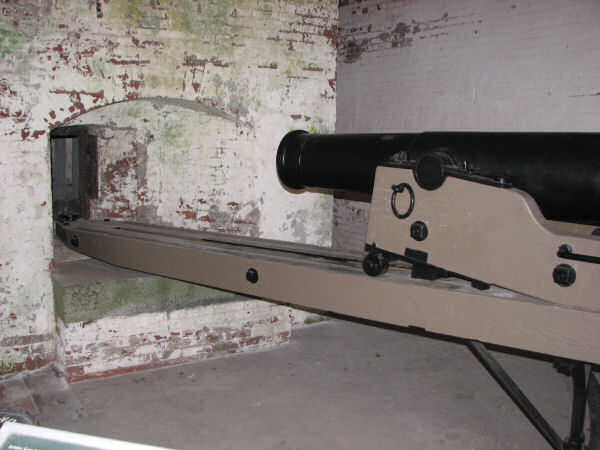 One of the neat aspects of the night tour is we were able to watch the opening and slamming of the cell doors. I took a video of it and aim to upload and share it tomorrow.

After disembarking the Alcatraz Flyer, we hopped on a bus to the Marina district where we dined with my friend Kristen and her boyfriend Bill. Kristen and I became friends in 2nd or 3rd grade, lost touch after going different routes for college and reconnected a while back on Facebook. It was fun chatting and dining together. I’m bummed that I forgot to get a picture of the two of us. We ate dinner at Delarosa, a place Kristen likes for their Roman style pizzas and cocktails. The food was delicious, but I felt the restaurant was rather loud. I’m not sure if that was because the seating was long shared tables in a small space or if it was because of the commercial loft style high ceilings. At times, I had a hard time hearing what Kristen or Bill was saying.

We then chatted some more in Kristen’s lovely apartment and checked out the view from the rooftop terrace. Part of that view included the Palace of Fine Arts. After leaving Kristen’s place, we walked the few blocks to it. I’m somewhat jealous that Kristen is within walking distance to such an amazing place. It is such a neat structure. It was built for the 1915 Panama Pacific Exposition. Originally a temporary plaster structure, it was rebuilt out of steel and concrete in 1964. We liked it so much, we revisited it during the daytime the next day of our trip, so stay tuned for more pictures. 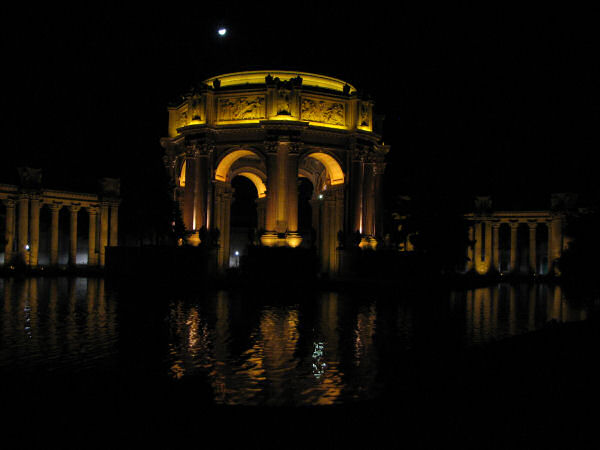 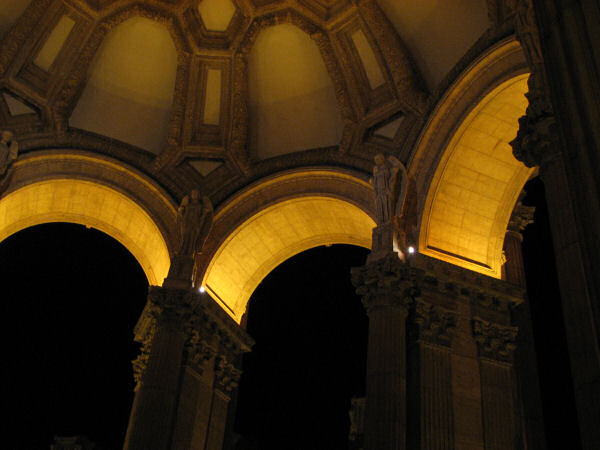 You can really tell how massive a structure it is by this next picture. 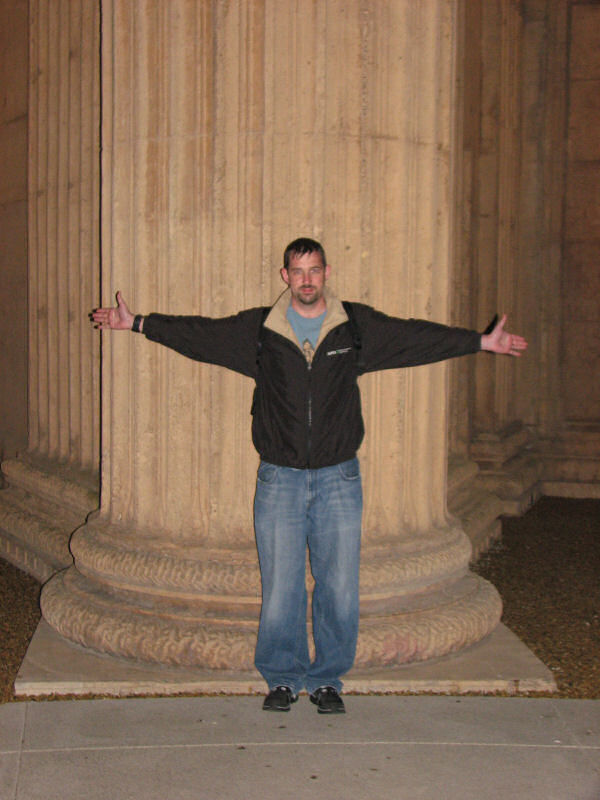 James in Front of a Column 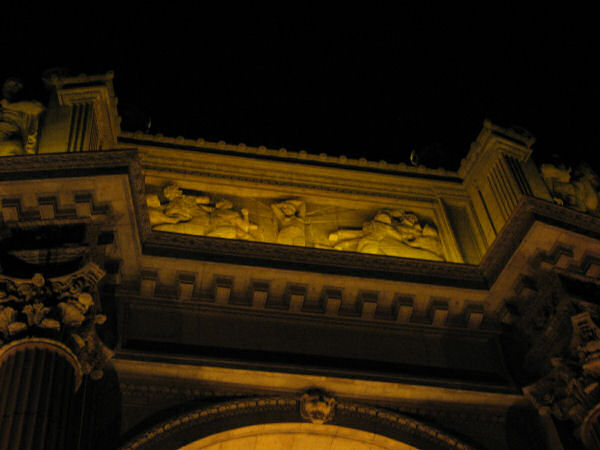 Stay tuned for days 2 through 4.