Jessica turned 10 months old on Monday. Only two months shy of her first birthday. I’m starting to work on little projects for her party. James’ Mom is going to make her the best little party dress. I’m getting so excited.

Last month, I mentioned that she wasn’t crawling up on her knees yet. Well, now there is no stopping her. She is fast. She also pulls herself up and cruises along the couch or anything really at the right height. She is also attempting to climb anything and everything. She has crawled into her car seat when it is sitting on the floor, her rocking chair, and she attempts to climb the couch, her bookshelf, and many of her toys.

Jessica After Crawling Into Her Carseat 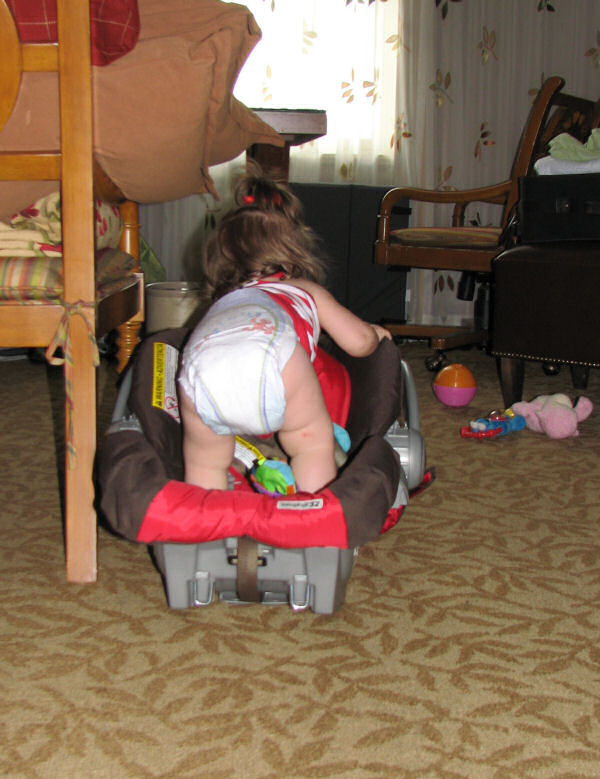 Jessica Standing Up After Crawling Into Her Carseat

And yes, that is a disposable diaper. I decided not to deal with cloth diapers on our trip.

She has started being more interactive with other kids and it so fun to watch her play with her cousins or the other kiddos in the play group.

She recently has started sticking her tongue out. I don’t know if she picked that up from Trevor on our trip or if she is just experimenting.

What Jessica is Saying

How Jessica is Sleeping

The tough love approach has worked and she is now back to sleeping through the night 99% of the time. The 1% of the time she doesn’t, her teeth seem to be bothering her, or something is different (we have company or we were staying in a hotel). She still takes two naps a day most of the time.

Jessica now has four teeth. Both her front top teeth have erupted. This makes meal time even messier, because she has taken to biting everything into pieces between her teeth. Crumbs, crumbs and more crumbs.

She has tried too many new foods to keep listing, but I will comment on a few. She has now had protein. She’s not the biggest fan of beans, but with cheese they’re okay. She enjoyed some of my tuna salad and she went to town on the roasted turkey at Costco last night (so I bought some). Bananas are still her favorite fruit and she will eat almost an entire banana in one sitting. She also loves spinach.

She eats around 4 to 5 ounces of food in any given meal. On our trip, she was eating like 6 to 8 ounces, so she was either burning a lot more calories playing in the pool or maybe she was going through a growth spurt.

She doesn’t like being cleaned up after meals, so sometimes we let her play with the washcloth in an attempt to keep her from getting upset. 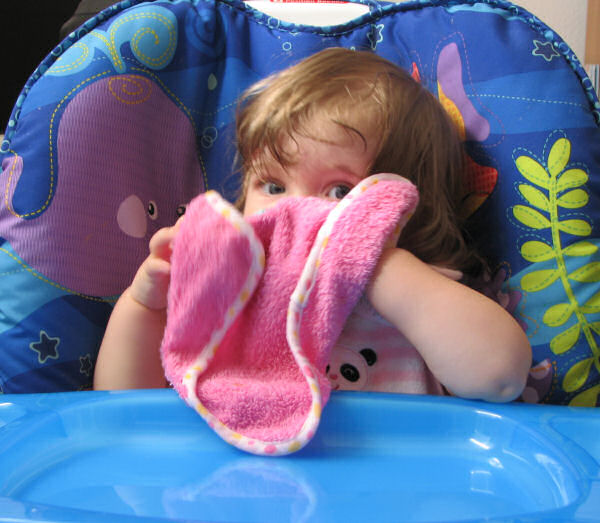 I am sorry there aren’t more pictures with this post, but I haven’t taken that many pictures since my last Jessica update two weeks ago that aren’t related to our Lost Pines Resort trip or James’ family visiting. Posts with those pictures will be coming soon.