The weekend before Christmas, we celebrated Christmas with my side of the family. My parents drove in from Midland and my sister Sarah and her little family drove in from the DFW metroplex to stay at my house and of course my brother and his wife, who live in Austin, came over to celebrate also.

Sarah, my Mom, and I prepared a big lunch Saturday that I had planned out the week before. The pinnacle of lunch was the Stuffed Crown Roast of Pork with sides of Candied Pecan Pear Salad, Apple Butternut Squash, the standard Green Bean Casserole, and rolls. The pork crown roast and stuffing was a breeze for me to make and turned out so impressive. The salad prepared by my Mom and Sarah was delicious. The apple butternut squash was tasty, but I don’t think it is something we will make again. I had planned to make Whole Wheat Rolls, but as I didn’t time it very well, we ended up going with these quick tasty rolls my Mom knew how to make. 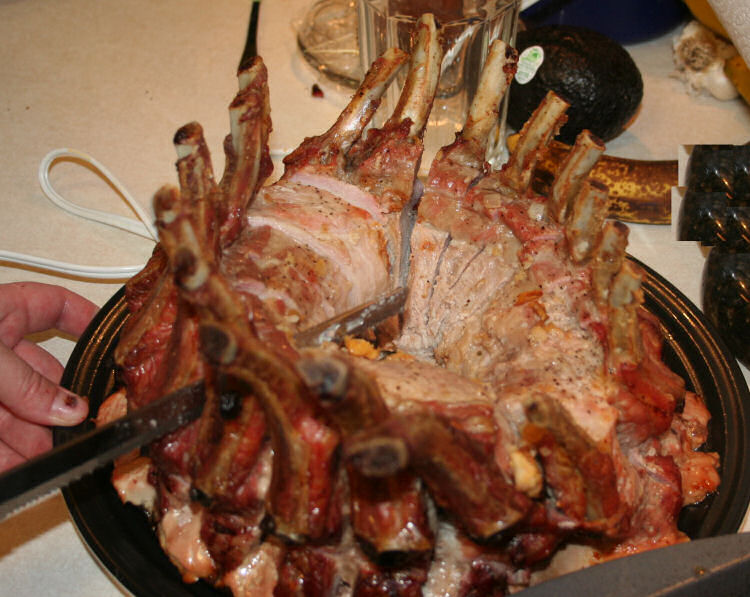 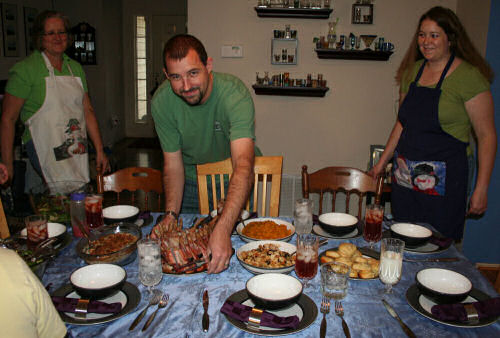 James Putting the Crown Roast on the Table

Meanwhile, for stuffing, place the raisins in a small bowl.; pour boiling water over raisins. Let stand for 2 minutes; drain and set aside. In a skillet, saute the onion, celery, and garlic in butter until tender. Add the bread crumbs, apples, parsley, salt, paprika, and raisins; mix well.

Carefully spoon stuffing into center of roast. Bake 1 to 1.5 hours more or until a meat thermometer reads 160°-170°F and juices run clear. Let stand for 10 minutes. Remove foil and stuffing. Cut between ribs.

In a small heavy skillet, melt butter. Add pecans; cook over medium heat until toasted, about 4 minutes. Sprinkle with sugar and cinnamon; cook and stir for 2-4 minutes or until sugar is melted. Spread on foil to cool.

For dressing, in a blender, combine ½ cup pomegranate seeds, vinegar, mustard, honey, salt and pepper; cover and process until smooth. While processing, gradually add oil in a steady stream.

Place squash in a large saucepan and cover with water; bring to a boil. Reduce heat; cover and simmer for 15-20 minutes or until tender. Drain.

In a large mixing bowl, mash squash with apple butter, cream, salt and cinnamon until blended.

After lunch, we exchanged gifts. My family has the best tradition for opening presents. We start with the youngest, who this year was my sweet baby nephew, and then work our way to the oldest before repeating the cycle until there are no more gifts under the tree. This way, we get to see everyone open their gifts. And to me, watching people open the gifts you give them is almost better than getting gifts yourself. The only bad part of this tradition is when one or two people get more gifts than other people. That is why I always get each member of my family the same number of gifts, usually two, so even if one gift is minor, they have something to open up. Growing up, this event occurred Christmas Eve after going to mass or as we got older before midnight mass. Now, that my siblings and I are all married and starting to have families of our own, the when is bound to change often. 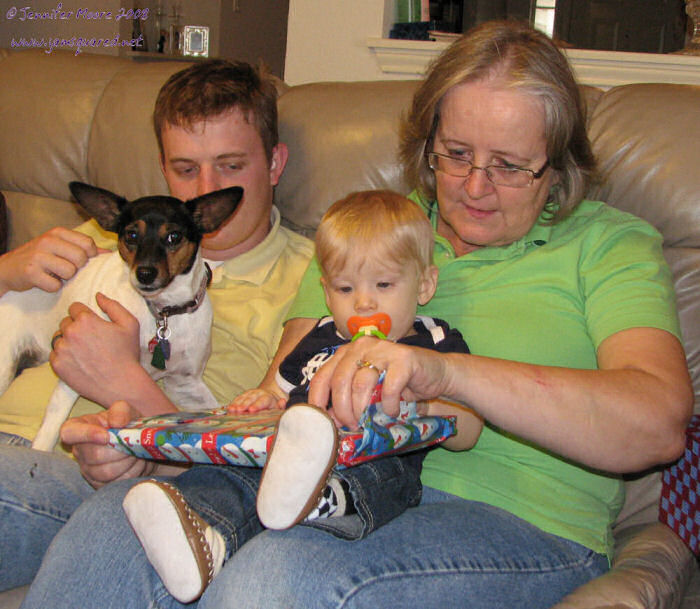 Saturday night, we visited the Trail of Lights. I’ve lived in Austin for six years now and this was the first time I’ve visited this free Austin tradition. The Trail of Lights is a 1.25 mile trail in Zilker Park decorated on each side with displays containing hundreds of lights. Each display has a theme, such as Disney characters, and is sponsored by local companies like Dell. There are concession stands, a little house where the kids can visit Santa, the Zilker Zephyr miniature train decked out with lights and the big Zilker Christmas tree, which consists of a tall center pole and strands of lights along wires radiating outward from the center pole to form a cone shaped tree. The Trail of Lights usually opens mid-December and continues through Dec. 23rd. It was quite crowded while we were there, so I would suggest going on a weeknight. All the lights were beautiful, but I especially enjoyed the nativity scene with the lighted camels. 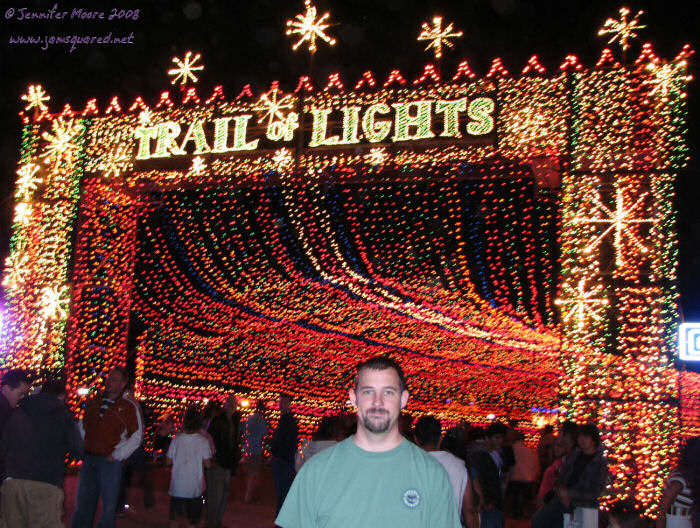 James at the Beginning of the Trail of Lights