Jessica turned seven months old on Sunday. I’ve started thinking about her 1st birthday party. I like the idea of a cowgirl theme, but James doesn’t. He doesn’t think there needs to be a theme and so doesn’t understand my desire to coordinate the party. As of now, the only thing set is the date, Sunday early afternoon, October 17th.

These photos of Jessica in her jungle tree might become a monthly occurrence. What do you think? Don’t worry, James was sitting in front to make sure she didn’t fall out of the tree. She’s smiling at Daddy in the second photo. 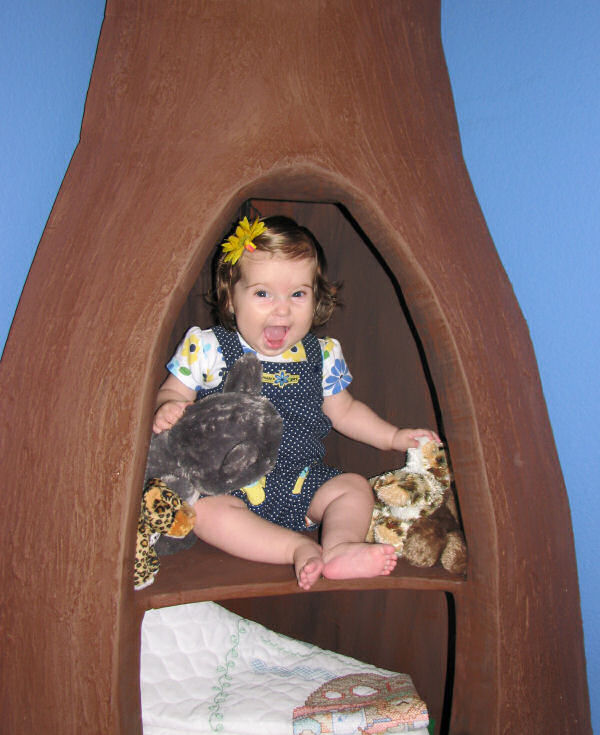 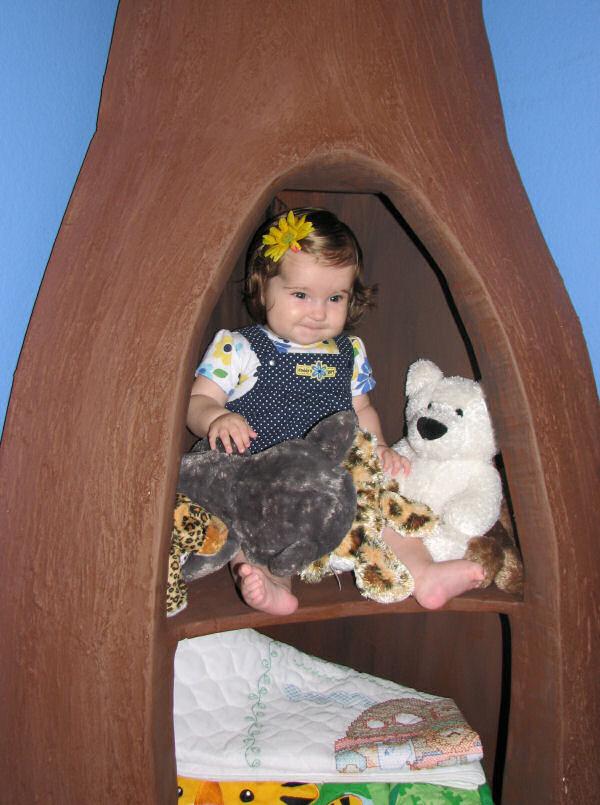 She has started teething, which is making her fussy. Sunday was especially bad as she didn’t really want to nap, so teething fussiness combined with exhaustion didn’t really make for a happy Jessica. I can’t see any teeth, but she has increased her desire to chew on stuff. She sometimes chews on her index finger in a weird manner that makes me think her upper gums are bothering her.

She now sits up quite well on her own and no longer really falls backward. Occasionally, she’ll fall sideways, but unless something gets between her and the floor, it doesn’t seem to phase her. 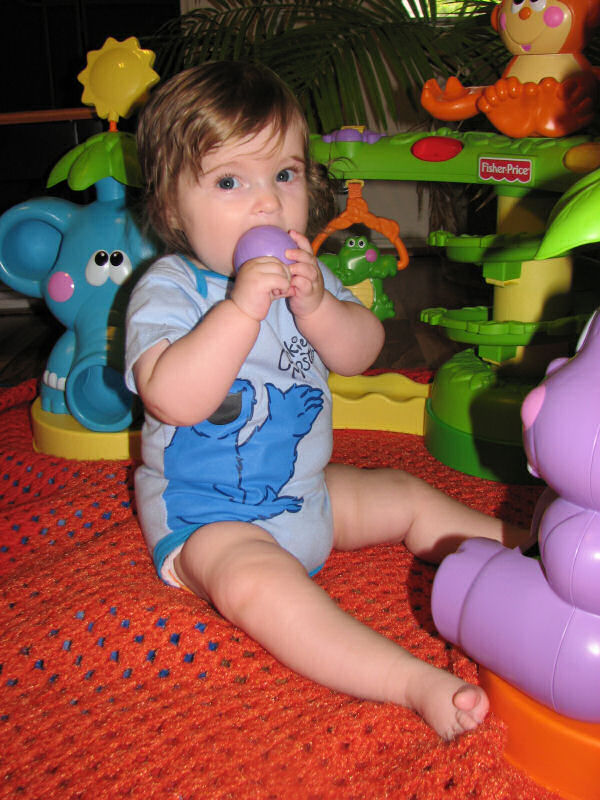 She definitely is a scooter. Jessica will scoot all over the living room floor. She even scooted over to a potted plant and pulled out the American flag I had staked in it and put it in her mouth (fortunately, the non-dirt covered end). I am going to need to move my plants I think (I moved the flag to a different pot for now). Occasionally, she’ll plant her toes kinda like a push-up pose and pull herself forward, so it is no longer just a backward scoot. I think she will be crawling soon.

She likes to babble to James and I, but is quieter when around other people. She enjoys dancing with her mama to the BG line dance (a song on one her children’s CDs), especially the part when you bend down low to touch your toes. She starts giggling when I bend down low with her.

She enjoys stopping at the playground during our morning walks. I think she likes the springy frog the best. 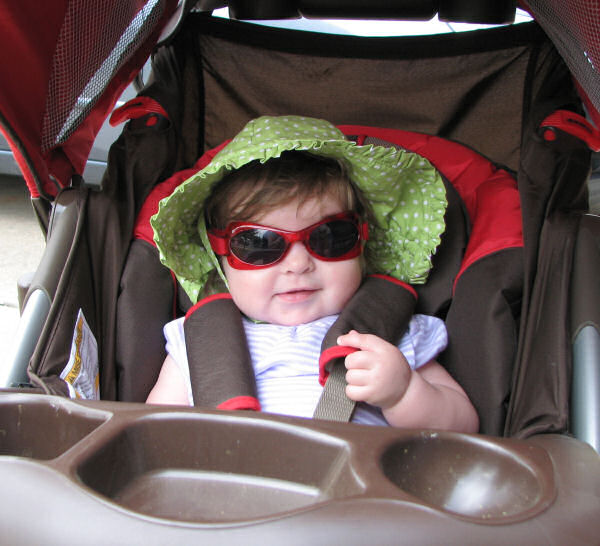 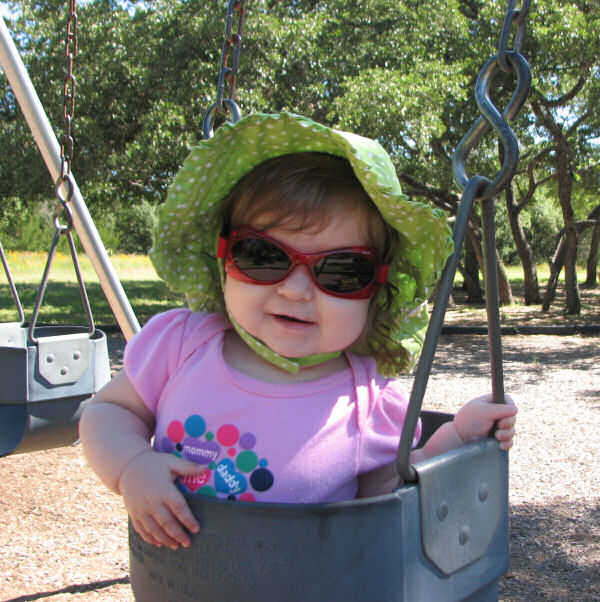 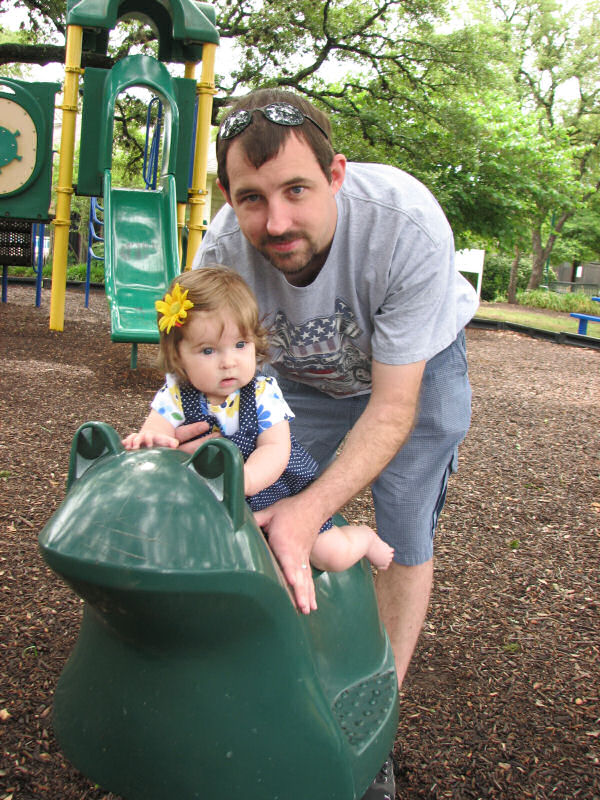 Jessica enjoys bath time, especially splashing around. Washing her hair is one of the hardest things to do. I love that she has longish hair, but eating and bathing make me think having a bald baby would be easier. I think I will get Sarah to help me trim the front when we go to visit in June. 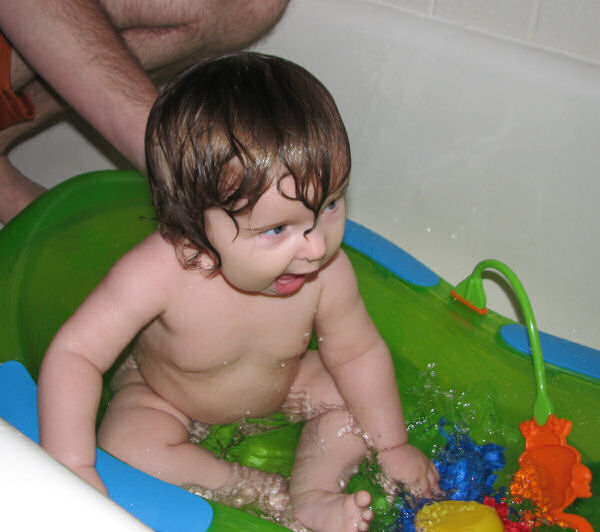 Jessica is still an excellent sleeper, sleeping 12-13 hours each night. Her morning nap is typically around 45 minutes long, but sometimes as long as 2 hours. Her afternoon nap is typically around 2 hours long, but occasionally shorter, usually when she naps for longer in the morning. Fortunately, the teething hasn’t interfered with her night-time sleeping, but her naps have sometimes been much shorter.

We started solid food about 5 or 6 weeks ago now. It has been one of the most frustrating experiences of being a mother. I’m glad we didn’t start sooner. We’ve tried rice cereal, sweet potatoes, bananas, oatmeal, butternut squash, green beans and today for the first time avocados. Bananas seem to be the food she likes the most. Most days, she will only take 1 or 2 spoonfuls before deciding she doesn’t want anything more to do with it. Occasionally, she has eaten much more. She nurses four times a day: when she gets up in the morning, at lunch after her morning nap, after her afternoon nap and right before bed. The solid food had been just before her afternoon nap and around 6 PM (about halfway between waking up from her afternoon nap and bedtime). Recently, I moved up the first solid feeding of the day. Now, she eats solid food prior to nursing at lunch. This has made solid food a much more liked event. She’ll eat most of the 1 ounce serving and then still nurses for quite a bit. Thanks Mom for the suggestion. Apparently, the milk I produce is filling enough that she isn’t really hungry. Today, she surprised me. After only really wanting 4 spoonfuls of avocado, I nursed her. As I nursed, I ate my lunch. After she finished, she was sitting on my lap playing while I finished the banana that was part of my lunch. She seemed really interested in it, so I gave her a small piece and she just ate it up. I ended up giving her like 4 or 5 small pieces. Prior to today, she hasn’t shown any interest in actually eating finger food.

I enjoy watching her learn and discover new things and I’m excited about what the future brings for her.

« A Visit from Papa and Nanny
Lemon Cherry Cake »

6 thoughts on “7 Months Old… a little late in posting”